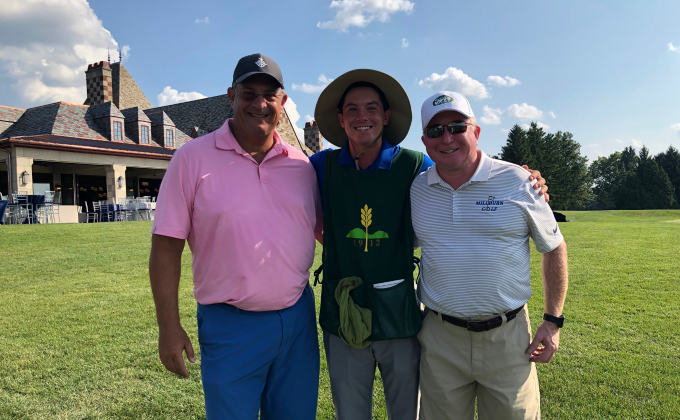 ELMSFORD, N.Y. (June 15, 2021) --The MGA Foundation’s GOLFWORKS program was created to provide meaningful employment in a nurturing and friendly environment for need-driven young men and women at MGA member clubs and courses. Since 1994, the program has continued to grow and in recent years, more than 300 student interns have worked at more than 70 member clubs each summer. While the goal of the program isn’t necessarily to secure a career in golf for these students, when that happens it certainly adds to an already rewarding experience. Matt Dreisbach, a 2019 GOLFWORKS intern, is one of the more recent examples of a GOLFWORKS intern turning their program experience into success in the golf industry. Just a few months ago, Dreisbach was hired by Mountain Ridge Country Club as their Assistant Director of Outside Golf Operations. His journey to his current position was aided tremendously by GOLFWORKS, but it didn’t even start in golf.

Dreisbach grew up playing hockey and never really touched a golf club until he was halfway through high school. "I started playing golf when I was 16,” said Dreisbach, now 24. “I just remember going to the local public courses in the summer and playing until it got dark. I was much more of just a summer thing until I stopped playing hockey.”

Dreisbach continued his hockey career through four years at Montclair State University in New Jersey. Though Dreisbach’s main sport was on ice, he still found time to keep up with golf, eventually turning it into more than just a hobby.

“There had been a golf team in years prior to me being [at Montclair] and a few people reached out to me from the rec center and asked me to revamp it,” said Dreisbach. “So, me and one of my friends got it cleared with the right people at the school. We played in a few tournaments each year and it was great to play in a competitive environment.”

As school was winding down, golf continued to become a bigger and bigger part of Dreisbach's life. After starting the club team the beginning of his senior year, he connected with Bob LeBlein Jr. After LeBlein joined the Montclair club team, he eventually told Dreisbach about the GOLFWORKS program.

“His dad, Bob LeBlein Sr., was a recruiter for the program in that area so I connected with him and learned more about it.”

Typically, GOLFWORKS interns are completing their studies in high school, not college, when they are accepted to the program. Still, LeBlein Sr. said that he wanted to give Dreisbach a chance because of his character.

“He’s just a good kid, plain and simple,” said LeBlein. “Anyone who meets him will say the same thing and he just gave a great first impression.”

Through LeBlein and the GOLFWORKS program, Dreisbach had his first work experience in golf during the spring of 2019 at Mountain Ridge Country Club in West Caldwell, N.J. Upon graduating from college that spring, Dreisbach was still contemplating his future career. However, he fell in love almost immediately with his new home at Mountain Ridge.

“I loved being outside and just fell in love with it from there,” said Dreisbach. “After the first few months I saw how busy the club got and how much potential there was in the golf business. I enjoyed it a ton and there was so much work to be done so it worked well.”

Within no time, Dreisbach experienced many of the behind-the-scenes jobs at Mountain Ridge. From when he started with the GOLFWORKS program in May 2019 through that first summer at the club, Dreisbach got a taste of each and every position he could find.

“I started working on the range for the first few days and then I got in the bag room,” said Dreisbach. “I would get there in the morning to set things up and get things ready for the day. Then after that it was a lot of member service work. I would greet [the members] when they arrived and accommodate their needs before the round. Sometimes I would work nights and close, so that involves making sure everyone completes their round without any issues and then preparing for the next day. It was basically all about making sure the members had the best possible experience.”

From May 2019 through February 2021, Dreisbach worked in his role as an intern focused on outside operations at the club. Then, in March of 2021, the club decided to extend a full-time position to him as Assistant Director of Outside Golf Operations.

“I was honestly proud and happy to be thought of in that regard for the full-time position,” said Dreisbach. “I’m sure being as young as I was in that position people might have been a little weary, but I was proud that they had faith in me to take on that role. It’s important, sometimes it’s a thankless job but it’s very important.”

Two years of hard work in the GOLFWORKS program certainly pushed Dreisbach towards the top of the heap, but as  LeBlein noted, his attitude has always been a difference maker in people’s eyes. That was extremely evident when Dreisbach was asked what his favorite part of his job is now.

“I think the best part and my favorite part is just being able to change people’s lives for the better. Whether it is caddies earning money to make a living or just members having a good time there, I think the impact you can have on people is the most rewarding part of the job. Golf really taught me how much you can help people.”

While Dreisbach is always trying to find ways to help the members of Mountain Ridge, he stopped to acknowledge all that the golf community has done for him.

“Everyone at Mountain Ridge has always been so great and accepting of me,” said Dreisbach. “The members are always easy to deal with and they always ask me how I'm doing. They did that even before I was full-time and they constantly check in with me. It’s just a really great environment to work in and the members are a huge part of that.”

There is no doubt that hard work played a part in his success, but Dreisbach was quick to credit Mountain Ridge for all they did for him as well.

“To me, Mountain Ridge means a lot,” said Dreisbach. “They gave me a very generous scholarship so I could attend grad school and they were there for me when I needed a job and wasn’t in the best shape out of college, not having any options. They took care of me and after just two years I got the position I have now.”

Now, members and guests to the club will find Dreisbach hard at work as he greets them upon arrival. Just a few months into his new position, he is already showing the club and its members why he was elevated to his current role. Much more goes into his job than many people think, and as Dreisbach said, the key is preparation. However, just because things are busy, doesn’t mean that Dreisbach forgets what he feels is the most important part of his job, making others happy.

“Sometimes it’s as simple as just having a positive attitude towards other people and making their day better,” said Dreisbach.