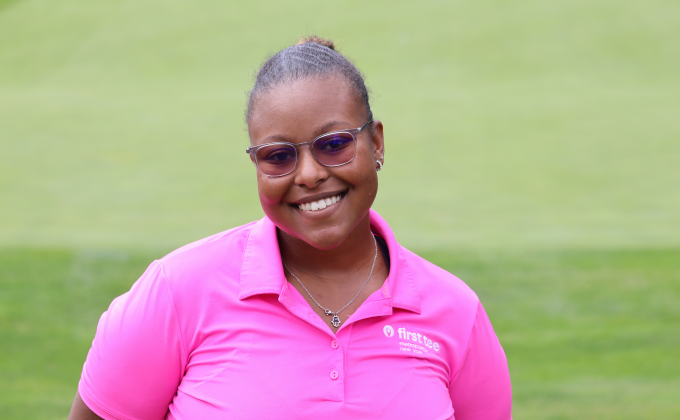 ELMSFORD, N.Y. (November 10, 2021) – Olivia Sexton has been involved with The First Tee program for over half her life. Sexton first learned about golf when she started taking part in The First Tee’s after-school programming at the age of nine. Just like that, golf went from a sport she had heard about a few times to a passion.

“I fell in love with it almost immediately,” said Sexton. “My parents saw a commercial for The First Tee on TV and put me in the program. I remember making contact with the ball for the first time and right then I realized this is what I wanted to keep doing.”

Growing up near Mosholu Golf Course in the Bronx, Sexton spent much of her free time at the nine-holer. As a First Tee participant, Sexton learned more about the game each year. It wasn’t long before she started to transition from a First Tee student to a First Tee instructor.

“Even before I started working for the First Tee I was volunteering,” said Sexton. “I always wanted to coach and help out other kids in the program.”

When she turned 14, Sexton turned the page and became a GOLFWORKS intern at the Mosholu First Tee site. With five years of experience in the program and a handful of those years spent volunteering as an instructor, Sexton excelled in her new role. One of the unique aspects about the internship that Sexton noted was the fact that she, as a kid, was trusted to be responsible for instructing other kids.

“There’s something unique about teaching someone close to your age,” explained Sexton. “Since I had just experienced what I was teaching, it felt easy to coach the kids in terms that they might understand more.”

Sexton just completed her fourth year as an intern, while also still participating in First Tee programs herself to improve her game. She cited that the most rewarding aspect of working at Mosholu was being able to watch the growth of the kids she taught over the years. Sexton referenced her own experiences improving her game saying, “it’s such a great feeling seeing others succeed because I know how tough it is to improve in golf, so being able to watch the kids I teach accomplish their goals is a great feeling.”

Sexton’s goals extend far beyond the golf course, she recently began her freshman year at SUNY Buffalo, focusing her studies on Biomedical Engineering, her intended major. Sexton hit the ground running, moving in a few weeks early to take part in the school’s Women in STEM program. Through hard work off the course, she was able to secure a scholarship from the Westchester Golf Association Caddie Scholarship Fund for her four years in Buffalo, due to her working in service to golf through her interships.

“The WGACSF was a huge help and really assisted in the college process,” noted Sexton.

Despite being away from home, golf will still be a major part of life for Sexton. She mentioned her clubs would make the trip upstate and that she would be on the course as much as possible. She also explained that after nine years at Mosholu, heading to college is like leaving two homes.

“That was really like my second family,” said Sexton “To be able to come here and do what I love with people that mean some much to me was truly special. This was my second home.”

During the summer, Sexton plans to return to Mosholu as much as she can. While her time as an intern may be up, she is confident that her experiences at Mosholu as a GOLFWORKS intern and with The First Tee will help carry her in this next chapter.