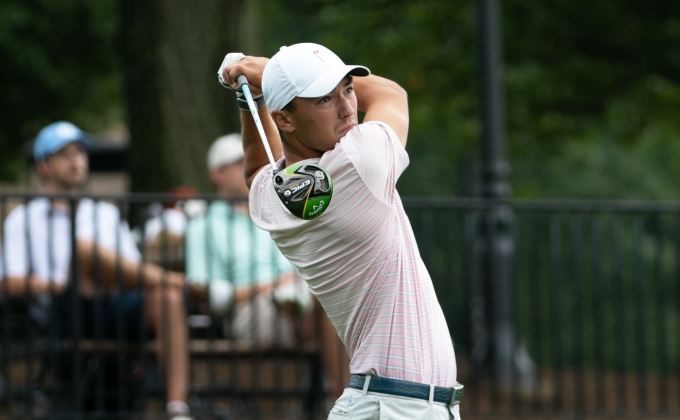 Ryan Davis is making his third consecutive appearance in the Met Amateur semifinals.

Saturday's semifinal matches tee off at 1:35 p.m. and 1:45 p.m., with the winners slated to square off in the 36-hole championship match on Sunday.

If Sample’s advancing to match play in a 9-hole playoff on Thursday wasn’t enough excitement, he provided more highlight moments Friday. After a back-and-forth match with Bernstein, Sample rolled in a birdie from just outside 10’ to oust the No. 1 qualifier in 19 holes.

“Coming down the stretch, I just hit some really great shots. It was what I needed, I was starting to feel a little bit of the heat. I’ve played a lot of golf the last few days.”

Despite facing a four-hole deficit early against 2017 champion Mattare, Davis won Nos. 7 and 8 to quickly cut the deficit in half. He and Mattare played closely on the way in, with Davis winning the 12th with a par-four. On 18, Davis knocked one to inside five feet to square the match. After pars on No. 1, Davis made par-four on the 15th to advance in 20 holes.

Wins on Nos. 4, 5 and 8 gave the steady Davis all the room he needed in the afternoon as he claimed a 3-and-2 victory over Mitchell. The two traded several holes coming in, but a birdie on the par-4 15th helped sealed his Saturday tee time.

Davis is aiming to make his third consecutive trip to the finals, after finishing as runner-up to Chris Gotterup last year at Hudson National.

“On the back, we kind of went back and forth for a little bit. I was kind of getting a little tired, it’s been a long day. But, I kind of pulled through and I’m really happy about my finish.”

In the morning, Wall and Goldenring stood tied through seven, but wins from Wall on Nos. 9, 11, 13 and 15 sent him to the afternoon round.

Greyserman won Nos. 10, 11 and 13 to go 2-up, but pars for Wall on Nos. 14 and 15 tied the match, while a conceded birdie after a stuffed approach shot earned him a 1-up lead going to 17. Greyserman rolled in a 25-footer for birdie, but Wall responded with one of his own from 12 feet to keep his advantage. Fours on the last earned Wall the 1-up win.

“This course is exhausting if you don’t hit it great.”

“I hit an awful wedge shot and missed the green in the fescue. I found a way to get up and down and actually win the hole, so that was a big momentum swing.”

“Dawson’s a really good friend of mine. We’ve played a lot the last couple years. … I know what to expect. He’s very consistent, makes a lot of pars and throws in some birdies. It’s going to be a really tough day because he’s such a good player.”

Steady play in the morning helped Jones race out to a 5-up advantage through eight, winning four holes with par against Carpenter. While Carpenter claimed three holes quickly on the inward nine, Jones closed it out with par on the 15th to advance to the afternoon.

Consecutive wins on Nos. 9, 10 and 11 extended Jones’ lead to four over Voetsch. While Voetsch took the lengthy 12th with four, Jones birdied No. 14 and a pair of 4s on 15 led him to his third trip to the semifinals of the Met Amateur in four years.

“I didn’t really have many slip-ups out there. A few errant tee shots, but I recovered really well. I was just able to get myself out of bad situations when I needed to. Overall, all parts of the game are working.”