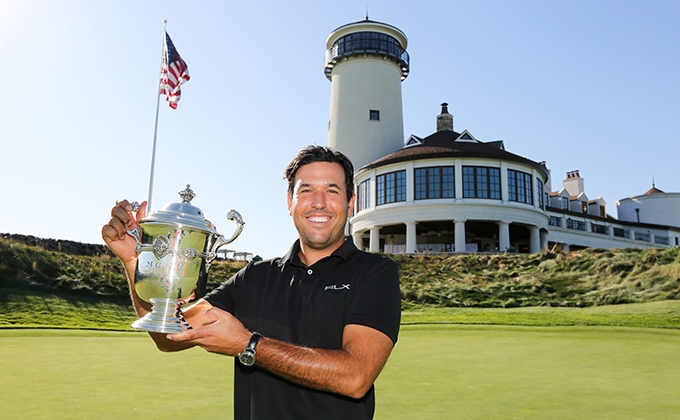 BAYONNE, N.J. (October 18, 2017) – A three-under 68 in Wednesday’s final round of the 11th MGA Mid-Amateur Championship led Darin Goldstein to his first-ever MGA title, as he defended his home turf at Bayonne Golf Club. Four competitors stood tied early in the day, but Goldstein’s four-under 138 total for the 36-hole championship allowed him to win the title by two shots and hoist the Westmoreland Cup.

Recent U.S. Mid-Am quarterfinalist Brad Tilley of Sleepy Hollow shot even-par 71 to finish in solo second at two-under 140, while Colby Anderson of Nassau Country Club rounded out those in red figures for the two days with a one-under 141. Two-time defending champion Trevor Randolph of Arcola fell off the pace on day two, but finished tied fourth alongside Devlin Walsh of Shawangunk, both shooting even-par 142 over the two days.

“It means a ton, especially to do it at my home course,” said Goldstein of hoisting his first MGA trophy after having several chances at titles in recent years. “A couple years ago when Brian Mahoney mentioned this tournament was going to be held here, I had it circled on my calendar.”

Following his one-under 70 in the opening round, Goldstein entered the final round two strokes off the lead and tallied consecutive birdies on Nos. 2-4 to produce just the start he was looking for. Though he faced a challenging putt on the second hole, his home-course knowledge paid off, with Goldstein reporting, “It was a put of probably 25-30 feet, but I’ve had it before.”

Though Goldstein also registered a trio of bogeys on his first nine, he settled in for the inward nine—checking the scores on several occasions to see where he stood. “Especially on this golf course, knowing where you are on the leaderboard is pretty helpful because you can play to different quadrants of the greens—take some risks or play a little safer,” Goldstein explained. Knowing he needed a birdie or two coming in, Goldstein did just that, adding circles to his scorecard on the par-five 13th and par-four 15th.

Goldstein credited the win to making a “good distance of putts,” along with a reliable driver. “You don’t hit driver a ton here, you really need to place the ball,” he said. “But, I don’t think I missed a fairway with driver in my hand—especially coming down the stretch, the last nine holes I hit every fairway and every green.”

Tilley, who first saw the course on Tuesday, posted four birdies and four bogeys en route to his even-par round. He also reached three-under at one point on the day, but a pair of bogeys on Nos. 9 and 10 set him back. He got one birdie back on the 15th to finish at two-under.

A birdie on the par-five 8th also propelled Anderson to the three-under number early on, but a trio of bogeys on Nos. 10, 11 and 14 slid him off the pace. A birdie on the challenging par-four 16th—part of the MGA’s Modern Dream 18 Presented by Rolex from earlier in the summer—led to his one-under total.

Randolph pushed his total to four-under with a birdie on the par-three third, but a bogey and double-bogey before he made the turn set him behind. He added two more bogeys coming in while also adding a birdie-three on the finishing hole. Walsh mirrored Goldstein’s strong start with birdies on Nos. 2-4. He added two more birdies and four bogeys the rest of the way for his even-par round.

Bayonne once again played just under 6,900 yards as a par 71. Following Tuesday’s play with a starting field of 100 competitors, a cut was made with the top 40 competitors advancing with scores of 76 or better. Players enjoyed two spectacular days at the incredible links-style layout, which also hosted the MGA Mid-Am in 2008.