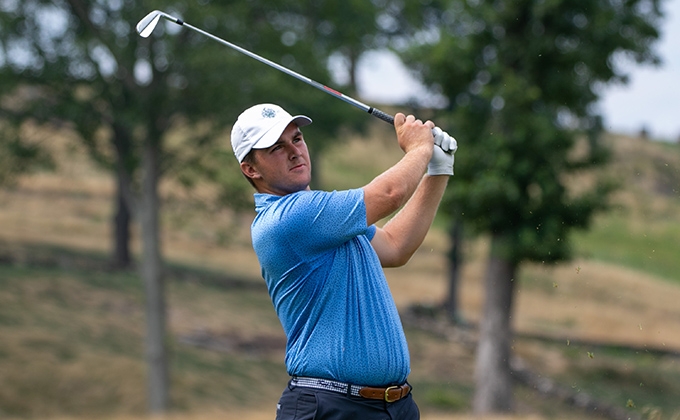 ELMSFORD, N.Y. (November 1, 2019) – The Metropolitan Golf Association is pleased to announce Chris Gotterup of Rumson as the recipient of this year’s MGA Jerry Courville Sr. Player of the Year Award following the 20-year-old’s breakout season that included a victory in the 117th Met Amateur Championship at Hudson National Golf Club. Big performances on the biggest stages highlighted the Little Silver, N.J., native’s season, as he also claimed the New Jersey Open and closed strongly in the Met Open to earn the coveted honor. The award will be presented to Gotterup at the MGA’s 122nd Annual Meeting and Dinner on Wednesday, December 4 at Westchester Country Club in Harrison, N.Y.

The MGA Jerry Courville Sr. Player of the Year Award is presented annually to the Met Area amateur who compiles the best record in select events during the course of the year. It is based on a system in which players earn points for their finishes in designated local, national, and international championships. Gotterup accumulated his season’s 770 points in just five events – an astounding figure considering that the MGA’s last 15 player of the year honorees have averaged more than 10 events in their season en route to earning the title.

“To win the MGA Jerry Courville Sr. Player of the Year award is so special to me for many reasons,” said Gotterup. “I have grown up playing in MGA events since I was a little kid and to see what I have become over the years is pretty awesome looking back on it. To have my name be affiliated with some of the great names in the history of the MGA and golf in general is truly awesome.”

Following a strong close to his sophomore campaign at Rutgers University in which he logged a trio of top-five finishes, Gotterup’s summer schedule got off to a less-than-ideal start with a missed cut at the Ike. It was an admittedly frustrating finish for Gotterup, having led the event with nine holes to play in 2018. However, he bounced back with a fourth-place finish at the New Jersey Amateur and prepared for the next stretch of events.

In the New Jersey Open at Trump National - Bedminster, Gotterup placed himself in contention coming down the stretch yet again and was determined not to let another opportunity slip away. This time, he fired a 4-under 32 on his inward nine to earn a three-shot victory.

“Coming down the stretch right in the thick of it and to be able to come out on top was so cool,” said Gotterup of the big victory. “I obviously played very well in order to win that event with all of the talented pros and amateurs of New Jersey playing.”

Even with the win, Gotterup grinded even harder in preparation to face Hudson National and the grueling challenge of the Met Amateur, which began just eight days later. In 2018, Gotterup had shot a course-record 63 at Arcola and claimed medalist honors, but lost his opening round match – making him eager for redemption this time around.

“My approach to the week was to take it one step at a time because at Arcola, I got way too caught up in what was going to happen, instead of making it happen,” said Gotterup. “I just wanted to try and get myself a friendly seed and then go to work in match play.”

He earned the No. 3 seed in qualifying behind rounds of 69-70 and in the quarterfinal round survived a 19-hole match against former Christian Brothers Academy teammate Jack Wall of Manasquan River. Another tough match ensued, as he edged Adam Xiao of Old Westbury by a 2-and-1 margin to create an all-Big Ten finale against defending champion Ryan Davis of New Jersey National who attends Penn State University.

The duo combined for nine birdies in an early eight hole stretch, but Gotterup closed the morning 18 with a 3-up advantage thanks to wins on three of the final five holes. His determination carried over into the afternoon where he won Nos. 9-10 and 12-13 to close strongly for a convincing 7-and-5 victory.

The win launched Gotterup to the top of the points list, but familiar competitors such as Ike champion Dawson Jones of Eagle Oaks and three-time Westchester Amateur champion Christian Cavaliere of Mahopac both stood within less than 50 points.

The Met Open at Piping Rock stood as the final opportunity for Gotterup – and most others atop the listing – to gain points. After an opening round 72, Gotterup improved in rounds two and three, posting scores of 69 and 68 to rise up the leaderboard. He finished tied for 15th and finished as the third low amateur. The 100 points maintained his cushion over Cavaliere and Jones, while 2017 MGA Player of the Year James Nicholas of Westchester made up ground thanks to his finish as low amateur.

Nicholas stood as the only threat to Gotterup as the season’s schedule wound down, but a missed cut in Fresh Meadow Country Club’s Sarazen Invitational sealed Gotterup’s place atop the listing.

Even at 20 years of age, Gotterup is a longtime Met Area competitor but has made giant strides in his game over the last two years. After earning nominal points in 2015 and 2016 as a junior competitor, Gotterup finished 27th in player of the year points in 2017. He put himself in contention in several events and finished seventh in 2018 before his rise to the top spot in 2019.

Cavaliere’s 733 points in seven events earned him second, while Nicholas finished third with 700 points. Jones (680), who also won the New Jersey Amateur this season, finished fourth, while Brad Tilley of Sleepy Hollow (595) shot up the listing behind a quartet of wins – including the New York, Westchester, and MGA Mid-Amateurs – to finish fifth. Trevor Randolph of Arcola finished sixth (523), with Thomas La Morte of Knickerbocker (509), Jonathan Jeter of Nassau Players (456), Prescott Butler of Meadow Brook (390), and repeat MGA Junior Player of the Year Award winner Jack Wall (389) rounding out the top-10 Honor Roll listing.