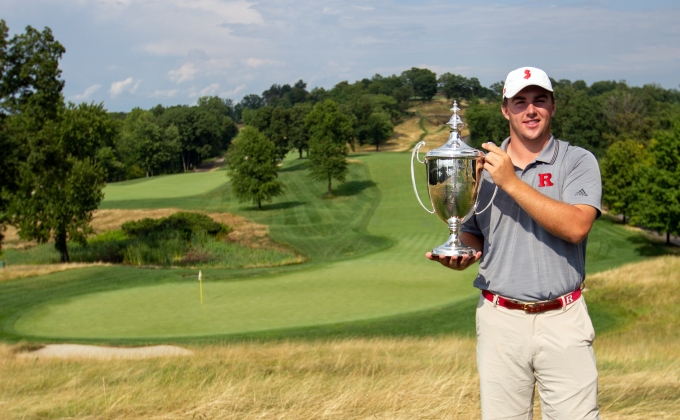 The morning round had only seven ties, with Gotterup and Davis matching one another with birdies back and forth. Par won the first three holes, with Gotterup taking a 1-up lead, but the duo then combined for nine birdies on holes Nos. 4-11. Both the par-four 4th and par-five 6th were tied with birdies, while Davis had a conceded birdie on No. 5 and rolled in two more on Nos. 7 and 11 to tie the match.

However, after tying the next two holes, Gotterup won Nos. 14 and 15 with fives to quickly gather a 2-up lead. "Fourteen was definitely a crucial hole in the morning match," said Gotterup. "We both hit really good drives and I went for it in two and Ryan layed it up into the bunker. I made a sloppy par, but Ryan ended up making bogey and it really turned the momentum my way."

Gotterup's par on the par-four 18th, playing 490 yards, then earned him a three-hole cushion heading into the afternoon.

The back-and-forth continued in the afternoon as both players won a pair of holes over the opening six. Davis' birdie and win on the par-five 6th put a little concern into Gotterup's mind, but the rising junior at Rutgers who was an All-Big Ten selection last season continued his steady play, knowing par was a good score.

"Hudson National is a beast of a golf course, so you're going to make bogeys," he said after the match. "I tried my best to not make any today. Most of the time if you make pars, you'll win or at least halve. I don't mind losing to birdies, but I don't like losing to pars."

See how the match unfolded between Ryan Davis and Chris Gotterup in the 117th Met Amateur final.

Gotterup didn't lose any holes the rest of the way, but instead rolled in a birdie on the par-five 9th to extend his lead to four. He then picked up Nos. 10 and 12 with pars and closed in style with a birdie on the par-three 13th for the 7-and-5 margin.

"I wanted to really finish it off and stuffed an eight iron in there to about eight feet," said Gotterup on his tee shot the 13th. "[Ryan] made par, so I knew I had two putts to win, but I really wanted to make that birdie and put an emphasis on this tournament. I did that and it felt really good to get it done."

While Gotterup is thrilled with his last several weeks of play, having become the first-ever person to win the New Jersey State Open and Met Amateur in the same year, he's already focused on the next task at hand: the 104th Met Open at Piping Rock Club. "It's been a great couple weeks," he said. "To come here and perform like I did just shows that I've put in a lot of hard work and it's starting to pay off. Hopefully I can keep it going. Going in to the Met Open, I have a lot of confidence and hopefully I can put a couple good rounds together at a tough course and have a nice week."

While Davis was unable to defend his title, the rising senior at Penn State put together an outstanding week of play, becoming the first reigning Met Amateur champion to return to the final since Cameron Wilson did so in 2010. He's also scheduled to compete at Piping Rock Club, Aug. 20-22.

Players expressed their awe and enjoyment of Hudson National Golf Club the entire week, as it welcomed its second Met Amateur Championship and fifth overall MGA event. Contestants were treated to a true test of golf for both stroke play and match play on the Tom Fazio design that opened in 1996. Stretching just to around 6,800-6,9000 yards each day, the course's firm fairways and fast greens provided plenty of opportunity to score, while wayward shots, especially off the tee, resulted in facing the challenge of thick rough or fescue.

"Four days of golf, 36 holes three out of the four days at Hudson National is no easy task," reflected Gotterup after his win. "This place is quite hilly and it's definitely going to take a beating on me–⁠I'll feel it the rest of the week. It's been an awesome ride."