Graham Holds Off Bakst in Playoff

Graham Holds Off Bakst in Playoff 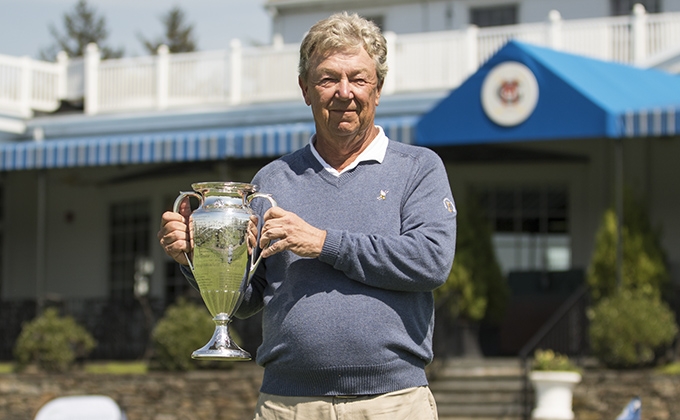 WEST ORANGE, N.J. (May 7, 2019) – The season-opening 92nd MGA Senior Amateur Championship took extra holes to decide, Tuesday at Montclair Golf Club, with Jim Graham of Winged Foot using a pair of pars in a playoff to defeat Ken Bakst of Friar’s Head after both finished at even-par 140 for the championship.

Graham entered the final round three shots behind 1997 U.S. Mid-Am champion Bakst, but recorded a closing 1-over 71 on Tuesday to Bakst’s 4-over 74. Both players scored routine pars on the par-four 10th, then found the fairway on the uphill, par-four 9th as the playoff continued, returning back up to the clubhouse. Graham, who turns 68 later this month, fired an impressive iron shot within six feet of the back hole location, while Bakst’s approach landed near the hole but spun off the back tier.

Bakst’s lengthy putt came up short, and though Graham’s birdie bid slid by, Bakst’s par attempt wouldn’t fall and Graham cleaned up his two-footer to claim the unexpected title.

“I’m in shock that I’ve ended up with the trophy after two days,” said the longtime MGA competitor Graham as he clutched the Horace L. Hotchkiss Trophy. “I came over, I just wanted to see the golf course and just play. I ended up playing pretty solid the first day and had a good thought to take me into the second day.”

In a back-and-forth round between he and Bakst, Graham carded four birdies—none more important than the one on the par-four 17th that once again pulled him even with Bakst.

“I had 155 yards downwind and I swung the 9-iron as hard as I could and got it in there hole high, about 10 feet,” said Graham. “One of my playing partners had chipped it on the same line, so I saw the general idea of how it was going to break toward the hole. I ended up making a nice putt and it went in.”

Graham found the 18th green from the right rough, while Bakst followed up and had a birdie look for the title. Both got down in two, leading to the playoff and Graham’s eventual victory.

“I really never thought I’d be an MGA champion,” said Graham, who following Monday’s round called himself a good “field filler."  “I’m a good player, but I’m definitely not the best player in the Met," he resoned. "There are a lot of guys that play better than me day-to-day, but it just happened to be my two days. So, I’m grateful.”

The duo separated themselves from a decorated list of contenders, with 2018 U.S. Senior Amateur quarterfinalist Ned Zachar of GlenArbor finishing third at 2-over 142. Reigning champion Adam Kugler of Alpine and two-time champion Jay Blumenfeld of Mountain Ridge tied for fourth with 3-over tournament totals, while Todd Wood of Fairmount, Peter Van Ingen of Deepdale and Roger Hoit of Baltusrol all carded 5-over for the championship. Dave Scialabba of Meadow Brook and Michael Troy of Winged Foot rounded out the top 10—all of which earn an invitation to this year’s MGA Mid-Amateur Championship at Wee Burn Country Club—with 6-over 146s.

Montclair Golf Club, hosting its first MGA championship since the 2014 Ike, served as an outstanding host for the season’s opening event. Despite rain late last week and over the weekend, the course delivered championship conditions and provided a stern test for the region’s top competitors aged 55 and older. This was the 12th time an MGA titlist had been crowned at the historic club, which has been host of a record-sharing eight different MGA events.