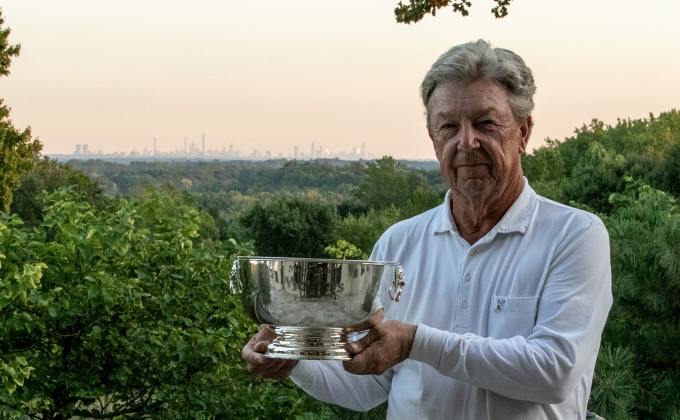 Coming in from the afternoon shotgun start, neither Graham nor Zahringer thought their rounds of 1-under 71 would stand up against the strong field of the Met Area's top players aged 65 and above. However, that proved to be the number, requiring a playoff between the familiar faces who have competed both with and against one another for years.

"I wasn't really nervous in either playoff because I didn't expect to be there to begin with," said the 68-year-old comparing the situations. "I just played my game."

"I didn't expect to be there to begin with."

Hear more on what Jim Graham had to say after earning his second MGA title this season at the 8th MGA Senior Masters yesterday.

Starting on the par-four 18th, Zahringer nearly chipped in for birdie, his ball dipping into the hole before spinning out. While Graham had about 15 feet for his own birdie look, it slid high and they moved on to the downhill par-three seventh. The roles were reversed there, with Graham getting up-and-down from short of the green and Zahringer two-putting for par.

On the par-five 8th, Zahringer hit his second over the green, then chipped to within a couple of feet. Meanwhile, Graham's second finished just above a green-guarding front bunker. He pitched his shot past the hole, but made the eight-footer for birdie. Zahringer's short look then missed wide, allowing Graham to hoist his second MGA trophy of the season.

"I thought I was going to lose the hole," said Graham, who admittedly struggled with similar-length putts throughout the day.

"Both times I just felt fortunate to be in a playoff and really, really fortunate to win them both," Graham said of his two wins on the year. With the victory, Graham becomes the first player since David Pastore (2014, Ike & Met Am) to win two MGA individual titles in the same year. He's also the first player to win both the Senior Amateur and Senior Masters in the same year, which turned out to be the driving force behind his playing at Manhattan Woods.

"I signed up because I won the Senior Amateur earlier in the year," he explained. "Someone had said, 'No one's ever won them both in the same year.' I go, well, that's a reason to sign up -- not thinking I was going to win, but that was really the motivation to send in my entry. To end up winning is unbelievable."

For Graham, the entire day was a fun first-time experience in the Senior Masters -- the MGA's youngest championship -- from the course to the camaraderie with longtime friends.

"It's a great venue, it was a great setup and I love the super senior distance," he said. "It made it so if you drive it good, you usually had short irons into the green, so it was fun."

Manhattan Woods served as an outstanding host for the event, testing players from tee to green as it welcomed its first-ever MGA championship. The layout, which opened in 1998, carves through the woods of West Nyack, providing a serene setting while also offering a skyline view of New York City from the clubhouse.