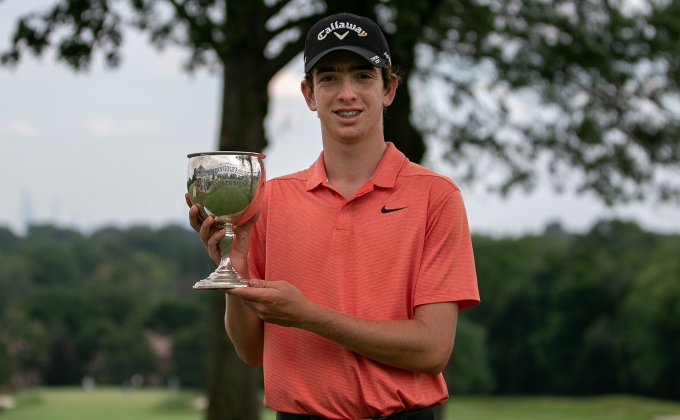 GLEN RIDGE, N.J. (August 14, 2020) -- Reed Greyserman of Short Hills, N.J., became just the fourth player in the 52-year history of the MGA/MetLife Boys Championship to successfully defend his title, using a pair of impressive victories on Friday to claim the victory at Glen Ridge Country Club.

Following a 6-and-5 morning victory over Liam Pasternak of Morristown, N.J., that was fueled by an opening-nine 33, Greyserman and Alex Moller of New York, N.Y., stood tied through seven holes of the championship match.

Greyserman won the next three holes, Nos. 8 and 9 with par-4s and the par-3 10th with birdie, to quickly take a commanding lead. After both tallied pars on the par-3 11th, Greyserman tacked on two more victories on Nos. 12 and 13 by taking advantage of Moller miscues. On 13, despite putting his drive in the left rough and beneath a tree, Greyserman hit his approach on the green, landing just over a front-protecting bunker and allowing the ball to run to the back shelf. He drained the 18-footer for birdie and a 5-up lead with five to play.

Though Moller won the next with a par-4, a tie on the par-4 15th earned Greyserman the 4-and-3 victory and successful defense.

Greyserman, who advanced to match play of the Met Junior last month, credited his putting for his success on Thursday and said his driver carried him through Friday's play en route to the title.

Runner-up Moller had a clutch finish to his morning match against Harrison Browne of Westport, Conn., making birdie on the par-4 18th to win the back-and-forth match, 1-up.

Glen Ridge, welcoming its second MGA/MetLife Boys Championship, once again served as an outstanding host for the event open to junior boys not yet 16 years of age. Between its tree-lined fairways and undulating greens, the layout tests the juniors accuracy and touch from tee to green.