Growing Through GOLFWORKS: How Ryan Mack Got His Start In Golf

Growing Through GOLFWORKS: How Ryan Mack Got His Start In Golf 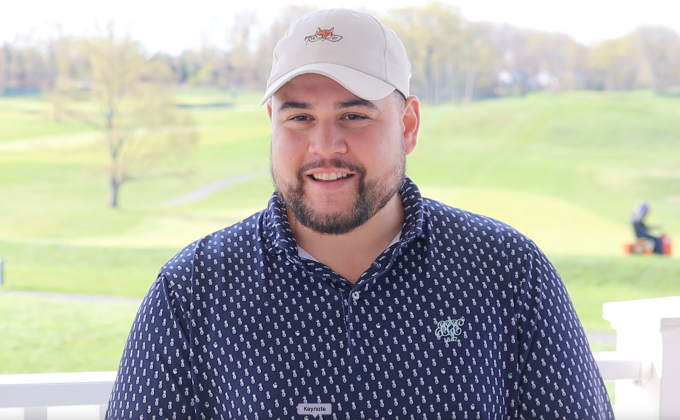 WEST ORANGE, NJ (June 24, 2022) -- When you ask most people how they were introduced to the sport of golf, they may mention going to the driving range as a kid, hitting balls in their backyard, or watching Tiger Woods on TV. Another way that many have been introduced is through caddieing. For Ryan Mack, the Director of Outside Operations at Essex County Country Club in West Orange, N.J., that’s exactly how it happened.

“I remember when I was 15, I was at a caddie clinic at North Jersey Country Club,” said Mack. “I was always the guy who would go to the range and hit a few drivers with my friends and family, but it wasn’t until that clinic where I really remember starting to prioritize golf.”

At the time, Mack was working as a summer camp counselor, but was looking to do something else. He had a group of friends who were caddieing for the summer and after the clinic piqued his interest, Mack started doing whatever he could to forge his way into the golf world. Mack caddied for three years at North Jersey Country Club while attending college nearby at William Paterson University.

“I was taking classes there and caddieing and I wanted a bit more opportunity,” said Mack. “I found out about Essex County and decided to come over here.”

At the time Mack was looking to make his move, Essex County didn’t have an opening on its full-time staff. However, the club, a longtime participant in the MGA Foundation’s GOLFWORKS program, was looking to fill a few intern roles. Mack jumped on the opportunity and spent the summer before his senior year in college working on the outside operations team.

“I got my start here because of GOLFWORKS,” said Mack. “I think the program is great because of the way it exposes kids to the game who maybe wouldn’t normally be exposed to it. For me, it was a way to get my foot in the door at Essex County, but for a lot of kids who I’ve seen come through our program the last few years, it’s just a good way to get their foot in the door in the golf industry in general.”

After interning at the club for a year, Mack was hired full-time as an assistant caddie manager. While his past experience made for a smooth transition, Mack explained there was still a lot to learn in the new role.

“It’s more responsibility,” he said of the new role. “It was just a lot of learning when it came to people’s preferences on who they wanted as their caddie, what their routines were, more or less I just had to learn the membership and what would give them the best experience.”

Mack would arrive to the course early and usually caddie for 18 holes to start his day, then after lunch he transitioned to helping the caddie manager get set for afternoon rounds while making sure the range and other practice areas were prepped for the afternoon and any rounds being played early the next day. Mack spent three years in the role and gained invaluable experience during his time in that position.

“For me I learned a lot, but the biggest thing was gaining the confidence to know I could run an operation like that,” he explained. “We have 320 golf members and 80 caddies so there are a lot of moving parts every day. Just knowing that I could handle that was big for me.”

Just before the pandemic hit, Mack was promoted to his current role as Director of Outside Operations. He is now in charge of all day-to-day operations around the club when it comes to managing the caddies and practice facilities. He also oversees the GOLFWORKS interns (Essex County has had four or more each summer over the past few years).

“I remember the biggest thing for me when I started [as an intern] was, I didn’t have the confidence, I was always questioning if I was doing things right,” said Mack. “So I just try and make things as comfortable as possible for all my interns until they get to that point. You can tell when someone gets that confidence, you can see it on their face. Once that happens, I believe it helps them work harder and it certainly makes the experience more enjoyable.”

At Essex County, GOLFWORKS interns can expect a well-rounded experience. They usually start out by cleaning and parking carts, while helping maintain the range. From there, Mack likes to give them more member-facing roles, like greeting people and taking their bags as they get to the course. For him and his staff, if the members are having a good experience, that means it’s been a job well done at the end of the day.

“The members are one of the reasons I love this job,” said Mack. “We have such a good group here and they are all very friendly. Between that and being outside a lot it’s a perfect job for me. I could never see myself being parked behind a desk, I just love being in this environment.”

While he doesn’t expect everyone to want to continue their work in golf after the job is over, he still wants each intern to be able to learn valuable skills that they can take with them no matter what their future holds. Another advantage to working at Essex County the way Mack has, is that now he is starting to see familiar faces back at the course year after year.

“We have four interns returning from last year’s program,” said Mack. “That’s really cool to see because it means they are excited about what they are doing and enjoyed their summer with us. It also allows me to continue to help them grow and give them some new challenges during year two.”

It is evident that whether Mack is talking about Essex County, GOLFWORKS, his co-workers, the members or simply the game of golf itself, that there is a deep passion there. Though Ryan Mack wasn’t born into a big golf family, when he learned about the game and started to work in golf it became clear: this is what he was born to do.