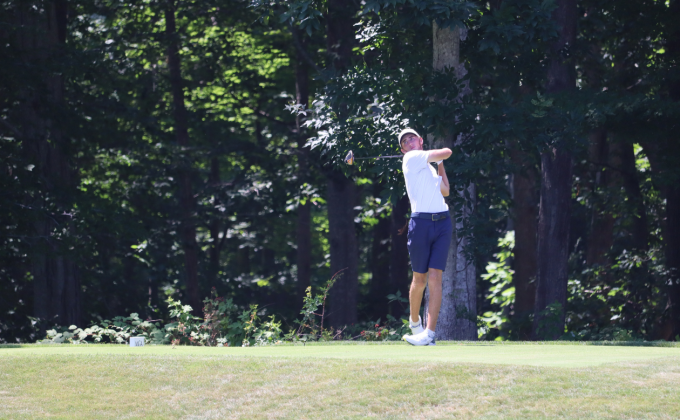 SHELTER ISLAND HEIGHTS, N.Y. (July 23, 2021) --  Lance Hollingshead of Basking Ridge, N.J., never saw the 18th hole in match play en route to winning the 53rd MGA/MetLife Boys' Championship. Hollingshead was impressive on the second day of competition, winning the final match 4&3 over  No. 10 seed Liam Pasternak of Morristown, N.J. Hollingshead, the No. 12 seed, won the first four holes on the back nine to take control of the match. He ultimately closed things out on the 15th green with a birdie putt.

"I just felt comfortable over every putt on the back," the 15-year old Hollingshead said. "Everytime I stood over a putt I didn't think it was going to miss. I was able to make a few and even when I missed it wasn't by much."

Hollingshead closed out the No. 1 overall seed, Lucas Rizo-Patron in the morning semi-final, going on a similar run with three straight holes won on the back. He took that match 5&4. In both the morning and afternoon, Hollingshead started slow but found his groove after a few holes.

"I started slow each round, even during the first day," said Hollingshead. "I wouldn't say I got into a groove [in the final round] until about hole seven. It opens up a bit more and I started attacking with my driver and being able to go after a few more pins."

Hollingshead had a distinct advantage in the final, reguarly driving the ball 20 yards past Pasternak. As one of the longer hitters in the field, he was able to combine that advanatge with strong iron play and putting for a lethal winning combination.

Pasternak played well on the front nine, going 1 up two sepearte times. Each time, Hollingshead won the following hole, never letting the 14-year old Pasternak get too far ahead. Pasternak made it to the semi-finals of last year's Boys Championship and with his second place finish earns an exemption to the Met Amateur and Carter Cup.

Hollingshead's win means that the Boys Champion is once again from the state of New Jersey. Reed Greyserman of Short Hills won the event the past two years.

The MGA/MetLife Boys Championship was first played in 1969 at Westchester Country Club. Since 1987, the event has rotated hosts between regions with Rumson and recently Glen Ridge hosting in New Jersey and Bedford Golf & Tennis in Westchester. While Gardiner’s Bay’s original architect is unknown, the layout—which was founded in 1896—was redesigned by Seth Raynor. The layout winds its way over rolling topography on Shelter Island, and includes multiple water views of the surrounding bays.