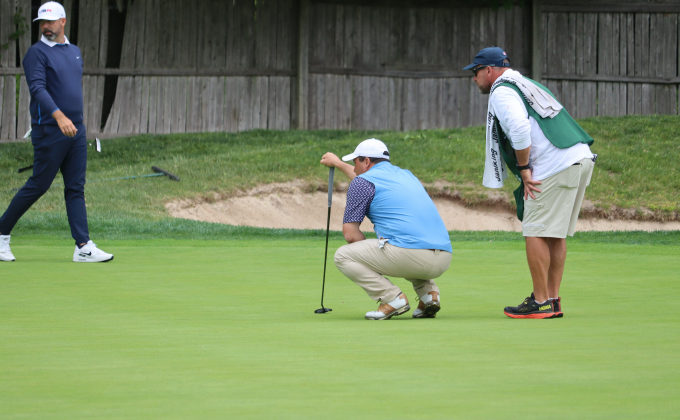 TENAFLY, N.J. (May 12, 2022) – It took until the back nine for Bill Hook of Tenafly, N.J., to get going, but when he did his run of birdies was enough to propel him to the top spot and medalist honors at Thursday’s U.S. Open Local Qualifying Round at Knickerbocker Country Club. Hook, the Head Golf Professional at Knickerbocker, fired a 6-under 66, doing all his scoring on the back nine, en route to the low round of the day. After an even-par 35 on the front side, hook dropped an eagle on the par-5 10th to kickstart his round.

“Not much was working for me today [on the front nine],” said Hook. “I made that eagle on the 10th and I looked [at my caddie] and we said our goal was to birdie every hole on the back nine.”

Though Hook fell short of that mark, he did birdie the 11th, 12th, 13th and 15th before making par on the final three holes. His round featured six birdies, two bogeys and one eagle.

“We just kept saying to ourselves ‘play golf’,” said Hook. “We were hitting some good shots and they just weren’t finding the bottom of the hole. They did on the back nine today.”

Hook was not the only impressive round of the day. Luis Fernando Barco of Lima, Peru raced around the course in 4-under, 68. Barco was 3-under after his front nine and traded a birdie with a bogey on the first two holes of the back. A birdie on the closing hole, the par-5 18th, gave Barco a strong hold on the second-place position.

A quartet of players followed at 2-under. The MGA's 2021 Junior Player of the Year Cole Ekert of Chatham, N.J., Justin Burkhamer of New Rochelle, N.Y., Henry Dubiel of Hobe Sound, Fla., and Brendan Hansen of Spring Lake, N.J., all finished with 70s on the day to collect the next, and final four, qualifying spots.

A three-man playoff was needed to determine the first and second alternate positions. Trevor Randolph, Sang Hun Ju and Ben Carpenter, who all finished at 1-under, competed in the playoff.

Final Qualifying in the Met Area will be held on Monday, June 6 at Century Country Club and Old Oaks Country Club.