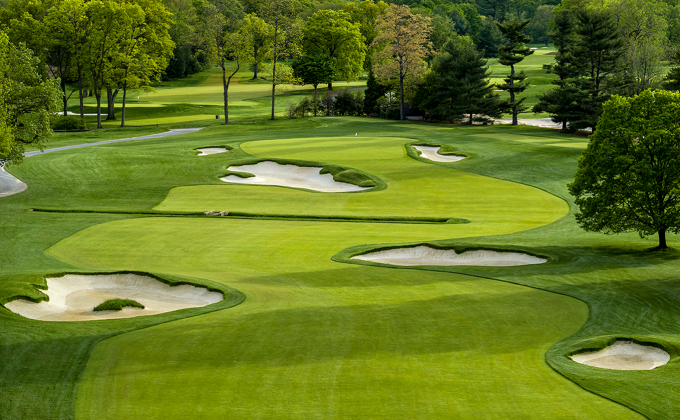 This will be the first multi-round championship hosted on the Lower Course since it's 18-month restoration overseen by Gil Hanse that was completed in spring of 2021. The work turns back the clock to Tillinghast's original intent for the layout. Hanse and his team replaced fairway bunkers, restored wider, twisting fairways, returned greens to original sizes, reintroduced ramp approaches to greens and repositioned greenside bunkers, while the club also made investments in underground infrastructure from irrigation and drainage systems to a sub-surface air system for the greens.

The championship features 133 of the Met Area’s top competitors vying for the iconic Ike bust trophy and the title in the region’s premier amateur stroke play event. Qualifying this year took place at six sites throughout the Met Area.

Defense Time
Ten times in the championship’s history has a player successfully defended his title in the Ike, with Jerry Courville, Sr. doing so on two separate occasions. Reigning champion Matthew Fields of Quaker Ridge aims to become the 11th, becoming the first since Cameron Young (2015-16) to repeat.

Past Champions
Four of the last five Ike champions are in the field: Matthew Fields of Quaker Ridge ('21), Mark Costanza of Hamilton Farm ('20), Dawson Jones of Eagle Oaks ('19), and Matt Lowe of Bethpage ('17).

Major Moments
By hosting the Ike, Baltusrol becomes the 19th MGA club to host all three MGA Majors--the Ike, Met Amateur and Met Open. The last came in 2015, when Peter Kim won the Met Amateur on the Upper Course.

Top-10s
Only one player in the field has an active streak of top-10s at the Ike: Mark Costanza. Costanza followed his 2020 victory with a tie for ninth in 2021. Last year, Ethan Ng of Knickerbocker had his string of three consecutive top-five finishes at the Ike stopped, as he missed the 18-hole cut at The Bridge.

Winning Ways
Seven players in the field have already hoisted a trophy in 2022:

It's Good to be Back
Past Ike champion Matt Lowe of Bethpage and past Met Amateur winner Pat Wilson of Hamilton Farm have both had their amateur status reinstated, bringing years of MGA experience and past MGA major victories back to competition.

Points in Play
The Ike is the season's first event with a significant point total up for grabs in the MGA Player of the Year race. The winner will receive 250 points.

Team Title
The Ike Team Championship is conducted concurrently with the Ike MGA Stroke Play Championship. The title is awarded to the two individuals from the same club with the lowest combined score for 54 holes. Westchester's Max Buckley and Tobin Whitman earned the title in 2021, but just Whitman is back in the field in 2022. Host Baltusrol has the most representatives in the field with seven, while Arcola and Old Westbury both have four apiece. Baltusrol's Stephen Wentz and TJ Betlow will have the honor of hitting the first tee shots off Nos. 1 and 10 on Monday.

Format
• Two days, 54 holes of stroke play
• Field cut to low 40 players and ties following Monday’s opening round
• Ike Team Championship runs concurrently (title goes to the two individuals from the same club with the lowest combined score for 54 holes)
• Eligibility open to amateur golfers who are members of an MGA Member Club with a Handicap Index not exceeding 5.0.