BRIDGEHAMPTON, N.Y. (June 27, 2012) - Fresh off an appearance at 112th U.S. Open and a practice round with Tiger Woods at The Olympic Club, Cameron Wilson of Shorehaven added another MGA championship to his list of accomplishments with a runaway victory in the 57th Ike Championship presented by Canon Business Solutions at Atlantic Golf Club. His dominant, nine-stroke victory over one of the strongest amateur fields in recent memory earned him the Ike Trophy, adding this prestigious championship to his 2006 MGA/MetLife Boys, 2009 Met Amateur, and 2009 Carter Cup titles. 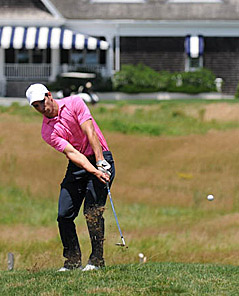 Entering Wednesday's 36-hole finale one stroke behind five co-leaders, Wilson, a rising junior on the Stanford University golf team, ran through the pristine East End track as if he was playing a different course than the other 38 players. With strong winds once again blowing over the 6,999-yard, par-72 layout, Wilson set a new Atlantic competitive course record with a flawless 7-under 65, which included five birdies and a chip-in eagle on the par-4 12th. The round also broke the record for lowest second round and tied for the lowest 18-hole score in Ike Championship history. To top it off, the 3-under 69 Wilson fired in his final round broke a 40-year-old record for largest margin of victory in the Ike.

“I’m glad to have won a bunch of [MGA] tournaments,” Wilson, the 2009 MGA Player of the Year, said. “I’ve been playing really well. I have a lot of confidence and this course suited me well. I didn’t expect to play so well in the morning but I knew I could do something close to that for sure.”

It was familiar territory for the 19-year-old, who just a month ago backed up an above-par round at U.S. Open Sectional Qualifying at Canoe Brook Country Club in New Jersey with a 7-under 65 to earn medalist honors.

Two-time MGA Player of the Year Joe Saladino of Huntington, paired with Wilson in the final round, had to settle for his second consecutive Ike runner-up finish with a total of one-over-par 217. Also coming in at 217 was 2007 Carter Cup champion Max Buckley of Westchester, who was three-under today with rounds of 69 and 72, respectively. Buckley said he hasn’t been playing well the last several weeks but has been working diligently with his instructor to get back into form, which returned the last few days. 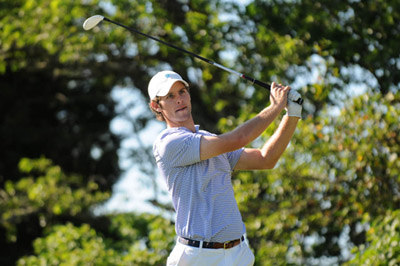 “It was like a light switch went off,” Buckley said. “It’s fun to do it in competition because that gives me so much confidence moving forward. I thought the conditions were awesome. Out here you could make a lot of birdies, especially on the par fives the way the winds were blowing, but you had to play smart."

Rounding out the top five were reigning Met Amateur champion and MGA Player of the Year Mike Miller of Knollwood (220), who finished fourth, and 2011 Met Amateur runner-up Sam Bernstein of Century, who finished alone in fifth with a total of 222.

The top 10 finishers in the Ike gain exemption into next year’s championship at Wykagyl Country Club, and included in this group was 2003 Met Amateur winner Mike Stamberger of Spring Lake and St. John’s University junior Pat Wilson of Panther Valley, who tied for sixth place with totals of 223. Recent NJSGA Amateur winner Ryan McCormick of Suburban, who held a share for the lead after the first round, failed to get anything going on day two and settled for eighth place at 224. Brandon Dalinka of the Ridge at Brook Back shot a 71 in the final round (225 total) to claim ninth place, while reigning Ike champion Tommy McDonagh of Shorehaven grinded his way to a tenth place finish (227 total). McDonagh and Wilson also repeated as Ike Team champions with a total score of 435, three over par.

This is the first time that Atlantic Golf Club, site of the 1995 Met Open along with the 2010 U.S. Mid-Amateur and the 1997 U.S. Senior Amateur, has hosted the Ike Championship. The Met Area’s premier amateur stroke play championship will be held next year at Wykagyl Country Club in New Rochelle, N.Y., on June 24 and 25.