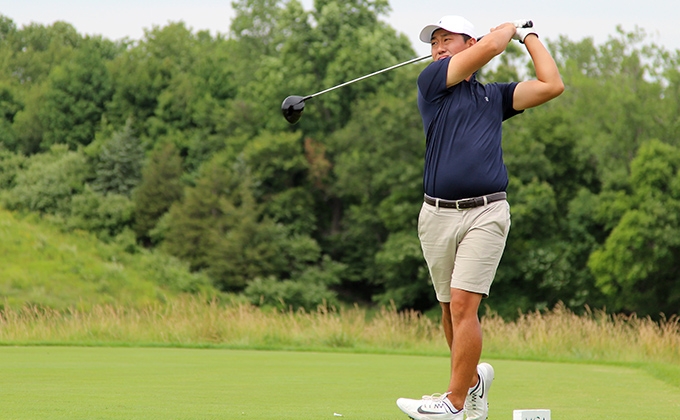 HAMBURG, N.J. (June 7, 2017) – A par on the second hole of a sudden-death playoff secured the 70th MGA Public Links Championship title for Alex Kang of Harbor Links, Tuesday, at Ballyowen Golf Club, after Kang and 2016 champion Michael Miranda of Bethpage fired matching 36-hole totals of 1-under 143.

The playoff began on the par-four 7th—Ballyowen’s most difficult hole—where both competitors carded bogeys. Continuing on the par-four 8th, Kang found the heart of the fairway and placed his approach to 10 feet. Miranda found the left fairway bunker off the tee and faced a birdie putt from the opposite side of the green. He wouldn’t get down in two, and Kang safely tapped in his par for the win.

Kang, 27, began the day with a 2-over 74 in the morning round and admittedly battled some frustrations on the greens, but remained focus as he set out in the afternoon. “I was really frustrated coming in, and after my first round I had no confidence on the greens,” he said.

But Kang found his stroke on the greens after lunch and posted a 3-under 69—one of just seven sub-par rounds on the day. “More putts fell in the second round, and that’s what it was,” he said. A native of North Carolina, Kang moved to the Met Area in 2012 after graduating from Florida Atlantic University. He took a hiatus from golf and just dusted off the clubs last year with a newfound respect and appreciation for the game.

Kang birdied Nos. 12 and 15 as he began his afternoon round on the par-five 10th, while also carding a bogey on the par-four 13th. However, his card would remain clean for the remainder of the round en route to the 69. He also tallied back-to-back birdies on Nos. 2-3 to continue his climb up the leaderboard and eventually earn his spot in the playoff.

Miranda began the day with a 2-under 70, trailing his St. Thomas Aquinas teammate Michael Frizalone of Bethpage by one shot following 18 holes. In the afternoon, Miranda pushed his overall score to 5-under through 10 holes, but gave four shots back on Nos. 12-14. He birdied the par-five 17th, but bogeyed the challenging finishing hole for a 3-over 73 and his 1-under 143.

Jonathan Jeter of Nassau Players posted the low round of the championship, shooting 4-under 68 in the afternoon for an even-par 144 total and third place honors. MGA eClub – Long Island members Andre Chi and Sean Cavanaugh finished solo fourth and fifth with scores of 1-over 145 and 3-over 147, respectively.

Ballyowen played to just under 6,800 yards in each round of the 36-hole championship as it hosted its first MGA Public Links Championship. Players raved about the stellar conditions and picturesque setting. “The property is absolutely beautiful, I loved it,” said Kang after his victory, when he also remarked that he’s already settled on returning to play again soon.

Established in 1936, the MGA Public Links is the oldest public links championship in the country and is played upon the Met Area’s premier public facilities. With his victory, Kang earns an exemption into this year’s Met Amateur Championship. The 71st MGA Public Links Championship will take place at Griffith E. Harris Golf Course in Greenwich, Conn.