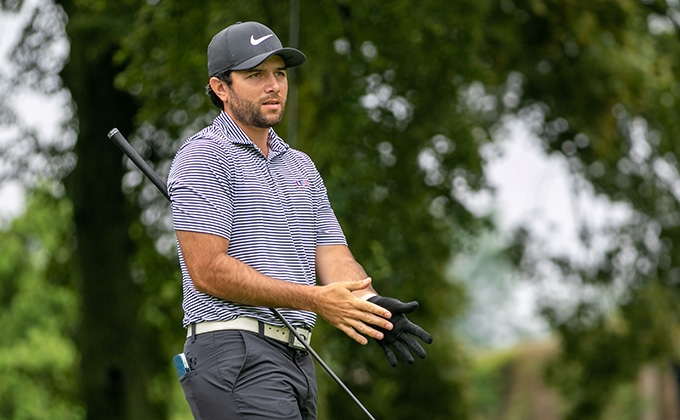 SUMMIT, N.J. (June 25, 2019) – Heavy morning thundershowers pushed back starting times for the 64th Ike MGA Stroke Play Championship Presented by Callaway, but that didn’t hold back Thomas La Morte of Knickerbocker as the 23-year-old fired a 7-under 65 on Canoe Brook Country Club’s North Course. The bogey-free round earned La Morte a two-shot lead heading into Wednesday’s final 36 holes of play.

Fellow Knickerbocker member Ethan Ng tallied a 5-under 67, while Dawson Jones of Eagle Oaks added a 3-under 69 to sit four shots back of La Morte. Five players—including Sam Goldenring of Brooklake who has back-to-back ties for fifth in the Ike and two-time MGA Mid-Am champion Trevor Randolph of Arcola—carded 2-under 70s. Another 12 players, including 2017 Met Amateur champion Matt Mattare of Darlington, carded 1-under 71s on the day.

“It was a solid round,” said La Morte. “I didn’t really make any mistakes. The greens were gettable. Considering the conditions, they were very good.”

Heavy rains pushed starting times back two-and-a-half hours to 10 a.m., with the afternoon wave going off beginning at 2:20 p.m., and play finishing just as darkness began to set in. In all, 41 players advanced to the final two rounds behind scores of 1-over 73 or better—leaving the entire remaining field within striking distance with 36 holes remaining in the first MGA major of the season.

La Morte began his round with an opening-nine 34, which started on No. 10. Shortly after making the turn, La Morte tallied birdies on Nos. 2-5, then added a final birdie putt from off the green on No. 9 en route to a closing nine 31 and his 65.

“Well, I’ve been very fortunate this year to have a chance to win pretty much every tournament that I’ve played in,” said the Campbell University graduate, referencing second place finishes in the Mittelmark Invitational, New York City Amateur and Hochster Memorial, which have launched him to the top of the MGA’s player of the year points race. “I’m just going to go home, take a shower, grab some food and wake up tomorrow and try to do the same thing. I’m definitely happy with the way I played,” noted La Morte. “But I think I could go lower tomorrow.”

Meanwhile, Ng put experience gained during his freshman campaign at Stanford to use, saying about the national championship season with the Cardinal, “I learned a lot about staying patient and relaxing on the golf course. My teammates always told me to have a positive mindset, so I kind of took that into this summer and I really applied it to this round and it worked.”

Ng had six birdies on the day to just one bogey, his hot stretch coming with birdies on Nos. 12 and 14-16. “I just played really solid,” said Ng, a two-time MGA Carter Cup champion. “I didn’t make many mistakes. I kept the ball in play, hit greens and made some putts.”

Jones began his round on No. 10 as well, making the turn in 2-over 38. But, the former Met Junior champion turned things around on the front, making five birdies en route to 31 and his 69.

Though the morning began with a tough start with 1.49 inches of rain soaking the course, Canoe Brook Country Club’s grounds crew led by Director of Grounds Jamie Devers quickly went to work and got the course ready to play, pumping and raking bunkers and squeegeeing fairways and greens.

“It’s amazing they got it into playing shape,” said Mattare after his 71. “It was soaked when we got here and by the time we’re getting done it was already starting to firm up.”

Wednesday’s final day of competition will begin at 8:30 a.m., with the final group going off at 10 a.m. The third and final round will begin early in the afternoon.