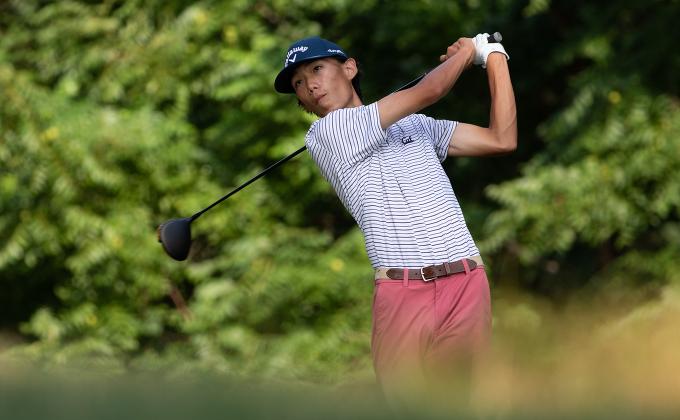 ELMSFORD, N.Y. (November 1, 2022) – The Metropolitan Golf Association is pleased to announce Tyler Lee of Franklin Lakes, N.J., as the recipient of the 2022 MGA Junior Player of the Year Award, Presented by Callaway. Lee, 18, used high finishes in the MGA’s marquee junior events, the 105th Met Junior and 20th Carter Cup to secure the award.

The MGA Junior Player of the Year Award, Presented by Callaway was established to recognize excellence among the highly talented junior competitors in the Met Area. Similar to the MGA Jerry Courville Sr. Player of the Year Award, a season-long points race helps determine the recipient. Lee collected 318 points on the year, edging Barnes Blake of Westfield, N.J., by 15 points.

“It was something I started thinking about towards the end of the season,” said Lee of the award. “I had a lot of good finishes, and it seemed like something I could accomplish. I was neck and neck with a few other guys, so it was a good feeling to pull it off. I feel like my game became more well-rounded this year and I played much better in MGA events too.”

Lee opened the 105th Met Junior Championship Sponsored by MetLife with a 1-over 71, but bounced back with a bogey-free 6-under 64 to capture medalist honors and the top seed by one shot. He found his groove at St. George’s Golf and Country Club as play progressed. Despite coming up just short in a tight final match against John Hiller of New York, N.Y., Lee was pleased with the week and his game.

“I actually started off a little slow that week, but I figured out something in my swing pretty quickly and was able to have a great tournament,” said Lee, who graduates from Delbarton in Morristown, N.J., next spring and has verbally committed to University of California Berkeley. “Winning medalist honors was great and I got into a good rhythm playing the same course over and over. Obviously I wanted to win but I felt like I played great all week and was really happy with the finish.”

Just a couple of weeks later, Lee proved his game stood among the top juniors once again. He finished tied for fifth in the Carter Cup, played across the Upper and Lower Courses at Baltusrol Golf Club.

The following month, Lee grabbed co-medalist honors in the New Jersey State Golf Association’s Junior Championship alongside Blake. While Lee was eliminated in the opening match play round, he had done enough to secure the year-end honors.

Behind Blake fell Met Junior winner Hiller (270) in the standings, while Carter Cup champion Cameron Besaw of New Canaan, Conn., and Will Lodge of Darien, Conn., rounded out the top-five in the points race at 235 points apiece.

Lee is the fifth player from New Jersey to win the award in its six-year history, joining Cole Ekert of Chatham (2021), two-time recipient Jack Wall of Brielle (2018, 2019), and inaugural honoree Jake Mayer of Scotch Plains. Luke Sample of New York, N.Y., earned the award in 2020.