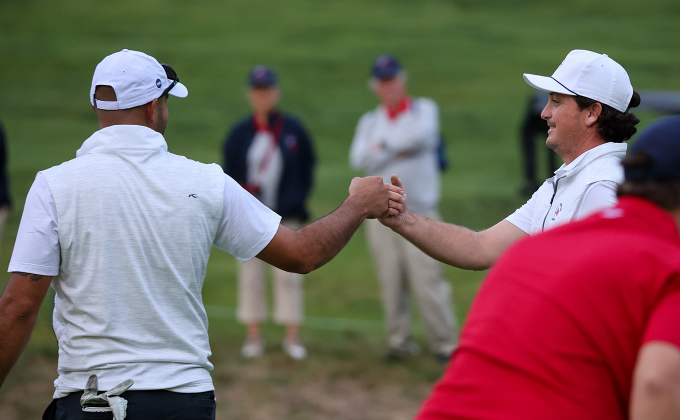 SCARSDALE, N.Y. (October 25, 2022) – The Ligue de Paris owns a 6-3 lead following the opening day of the 20th French-American Challenge at Quaker Ridge Golf Club, with one four-ball match yet to finish after being suspended due to darkness.

The Ligue de Paris took a 3-2 lead following the morning foursome matches, as the duos of Mark Costanza of Hamilton Farm and Brad Tilley of Sleepy Hollow, and Christian Cavaliere of Mahopac and Chris DeJohn of Arcola both earning convincing 5-and-4 victories for the Met Area side.

Costanza and Tilly won Nos. 2-4 over Christophe de Grancey and Nicolas Foschia, then won four of seven holes from Nos. 8-14 as they closed out the match and put the first point on the board.

“We lost the first hole but rallied with a couple birdies to flip the switch a little bit and it was great—we were feeding off of each other nicely,” said Costanza, who’s making his second international team appearance.

“The way we were playing all day, both of us, and the putts we were making, it put us in a great spot to continue and extend that lead,” said the four-time international team competitor Tilley.

Cavaliere and DeJohn defeated Hugo Legoff and Marin d’Harcourt, using wins on the first four holes to jump out to an early lead before adding three consecutive wins on Nos. 8-10 to ultimately also close out the match on the par-5 14th.

Both women’s matches made it all the way to the final hole with the French duos owning a 1-up lead, and both held off their Met Area counterparts to put points on the board.

Costanza and Tilley locked in their 2-0 day with a 5-and-3 victory over Rouillon and Couilleau in the afternoon four-ball, continuing to feed off one another’s solid play.

“I think we’re both steady players and we both had a pretty solid game today, so we definitely feed off each other and had a ton of fun out there together. We played well and it was fun to win the matches the way we did,” said Tilley.

While Ina Kim-Schaad of Deepdale and Jennifer Rosenberg of Glen Oaks faced a four-hole deficit through eight holes, the duo fought back and extended their match all the way to the 18th hole against Chloe Salort and Pauline Stein. However, the French pair proved clutch once again, as pars tied the hole and earned the visitors another point in what was the lead afternoon match.

The Ligue de Paris also took the second and third matches, with Alexandra Farrret and Perrine Gouin defeating Noelle Maertz of Ridgewood and Anina Ku of Neshanic Valley by a 4-and-3 margin and Hugo Legoff and Marin d’Harcourt besting Goldstein and Mattare, 3-and-2.

Cavaliere and DeJohn hold a 1-up lead over de Grancey and Foschia. The pairs began the 18th hole but did not finish due to darkness. They will conclude the hole at 7:45 a.m., Wednesday, with the event’s closing singles matches teeing off at 8:00 a.m.

“I know our whole team has to do a really good job tomorrow,” said Tilley. “I think we’re up for the challenge.”

With Quaker Ridge hosting the event, it becomes the first club to have hosted both the Governor Hugh L. Carey Challenge Cup (2003) and French-American Challenge. The club has strong history of hosting both MGA championships and international team competitions already, serving as host of the Walker Cup and Curtis Cup in 1997 and 2018, respectively.