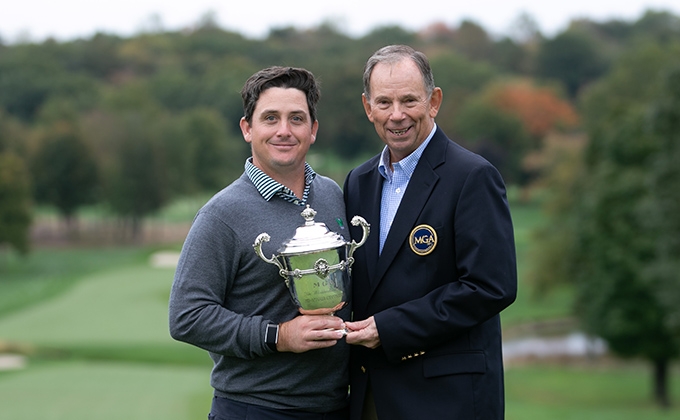 DARIEN, Conn. (October 8, 2019) -- A 50-foot par save for Brad Tilley of Sleepy Hollow on the final hole led to a wild finish at the 13th MGA Mid-Amateur Championship at Wee Burn Country Club, as he claimed the one-shot win over Chester Patterson of Darlington and Jonathan Jeter of Nassau Players with a 4-over 148 total. After making triple-bogey seven on the 17th, Tilley hit his drive on the finisher out of bounds, but after a drive and a ripped 5-wood up the hill to the green's lower tier, he drained the lengthy putt for a five.

Just behind, Patterson ended up hitting his second shot on the 18th out of bounds. After laying up his fourth, his fifth found the back of the green. After his three put from above the hole, Tilley was left as the victor, completing his sweep of Mid-Amateur titles following wins in the New York State and Westchester Mid-Amateurs last week.

Wee Burn, a three-time host of the U.S. Women's Amateur, is welcoming an MGA event for the sixth time, last hosting the Senior Amateur in 2008. The club was established in 1896 in Noroton and in 1923 relocated to Darien, opening its Devereux Emmet layout two years later. The course is characterized by small greens often surrounded by either mounds or dropoffs, while a pair of it's namesake "burns" or streams affect play on eight holes.