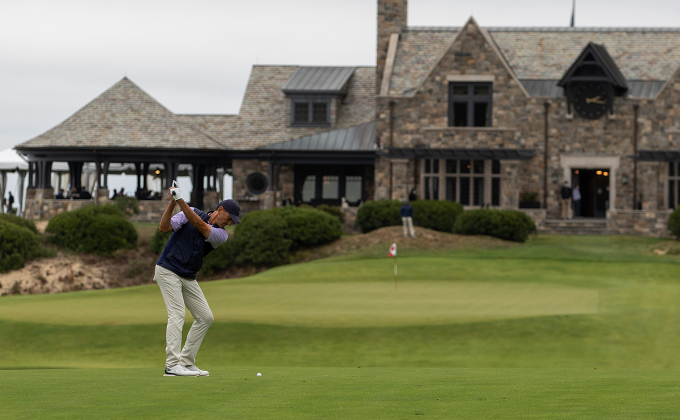 BAITING HOLLOW, N.Y. (October 5, 2021) -- Friar's Head's own Ken Bakst heads into the final round of the 15th MGA Mid-Amateur Championship atop the leaderboard, with his opening 4-under 67 placing him one shot in front of Tim Murphy of Stanwich, Trevor Randolph of Arcola and Chris DeJohn of Arcola.

Tuesday's final round begins at 8:30 a.m., with Friar's Head founder and managing member Bakst and Murphy teeing off in the final pairing at 10:24 a.m. Even though Bakst is at home at Friar's Head, on Monday he referenced the different feel that comes with championship golf.

"It’s funny being out here on a course I know really well," said Bakst, the 1997 U.S. Mid-Amateur champion. "I always tell people competitive golf is different golf. It’s challenging and it gets in your gut. I made some good putts, I made some good shots and I was pleased with the number."

Bakst rolled in seven birdies on the day, with five coming on the first nine. After going par-birdie-bogey to start, Bakst had birdies on Nos. 4, 6, 7 and 9 to turn in 4-under. On the inward nine, he added a pair of both bogeys and birdies to round off his opening round score, narrowly missing a closing birdie on the last.

Randolph had a rollercoaster opening nine that included three bogeys, a birdie, and an eagle, but settled in over his last nine and closed hot with four birdies over his last five holes. Murphy and DeJohn had similar rounds, using an eagle on the par-5 14th, three birdies and two bogeys en route to 68s. Murphy had a pair of both birdies and bogeys in his first five holes and had no miscues the rest of the way. DeJohn, starting on No. 10, made the turn in 4-under before a 1-over 37 to close.

Past MGA Public Links champion Alexander Kang of Harbor Links rounded out those with sub-par scores on Monday, posting 1-under 70.

The MGA Mid-Amateur Championship debuted in 2007 at Hudson National and has since visited some of the region's most respected venues, with Maidstone Club, Wee Burn Country Club and Somerset Hills Country Club hosting the most recent playings. The trophy, the Westmoreland Cup, is named for longtime MGA Tournament Director Gene Westmoreland who was instrumental in launching the championship and has a great passion for the mid-amateur game.