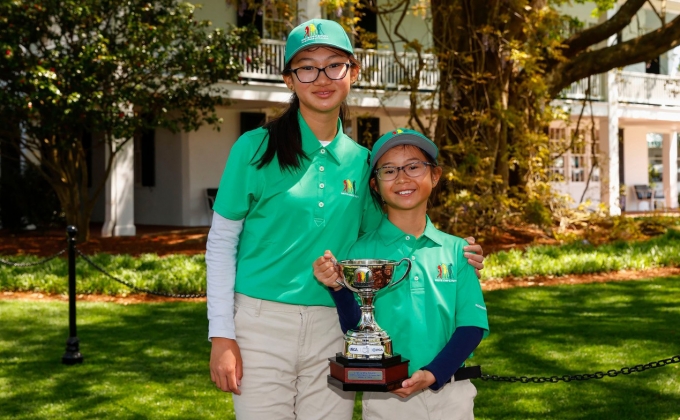 A pair of return National Finalists logged the highest finishes. Lance Hollingshead of Basking Ridge, N.J., performed steadily throughout, scoring seven points for driving, eight on his chipping and five on his putting. His 20 points left him one point out of a tie for second, while the Boys 14-15 age division winner finished with 28 points. Though Alexandra Phung of Forest Hills, N.Y., started slowly with just three-points for driving, she bounced back and scored eight and nine points, respectively, on her chipping and putting. Her total of 20 points led her to a tie for third in the Girls 7-9 year-old division, just three points behind the winner.

Older sister Amelie Phung finished fifth in the Girls 12-13 age division, using eight poiints from her putting to score 17.5 points. In the Girls 14-15 division Samantha Galantini of West Orange, N.J., registered nine points from her chipping on her way to a total of 15 points and a sixth-place finish.

ELMSFORD, N.Y. (April 2, 2021) – After an extra year of anticipation, four Met Area juniors will compete in the Drive, Chip & Putt National Finals at Augusta National Golf Club on Sunday, April 4. The quartet advanced through local, sub-regional and regional qualifying during the summer of 2019, but the COVID-19 pandemic postponed the competition. Now, they’ll be on the grand stage, competing on the eve of the 85th Masters Tournament.

After advancing to the sub-regional competition five years in a row, Samantha Galantini of West Orange, N.J., sealed her invite to Augusta National by advancing through Shackamaxon and TPC River Highlands. Galantini was introduced to the game at three years old by her family and will compete in the 14-15 year-old division.

Meanwhile, Lance Hollingshead of Basking Ridge, N.J., will be making his second appearance at Augusta National, having advanced to the 2018 National Final. He will compete in the 14-15 year-old division.

Sisters Amelie Phung (12-13 division) and Alexandra Phung (7-9 division) of Forest Hills, N.Y., round out the Met area competitors. Their talents extend beyond golf, with both being nationally ranked in chess and having earned medals for the U.S. Team. Amelie is making her first appearance in the finals after three trips to the regional level, while Alexandra is making her second consecutive appearance. As the youngest (7) in the competition in. 2019, she finished 6th in her age division.

Drive, Chip and Putt is a free youth golf development initiative for junior golfers of all skill and ability levels, aimed at sparking a lifelong interest in the game. There are 80 finalists – 40 boys and 40 girls – competing between four age divisions, with scoring centering around the game’s three fundamental skills of driving, chipping and putting.