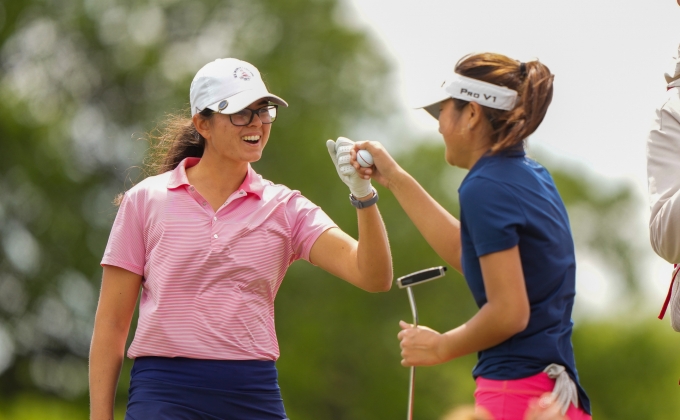 Ami Gianchandani and Kaitlyn Lee fist-bump during the first round of the U.S. Women's Amateur Four-Ball Championship. (Photo: Darren Carroll/USGA)

UPDATE (April 26, 2021) -- Met Area players' momentum in the 6th U.S. Women's Amateur Four-Ball Championship came to a halt in the Round of 32, as teammates Ami Gianchandani of Watchung, N.J., and Kaitlyn Lee of Scarsdale, N.Y., and Jennifer Rosenberg of Laurel Hollow, N.Y., and her partner dropped their opening round matches.

Yale teammates Gianchandani and Lee shared co-medalist honors following a pair of 69s, but couldn't find the same groove on Monday. Only four holes were won in their match against Kentucky teammates Jensen Castle of West Columbia, S.C., and Marissa Wenzler of Dayton, Ohio. Castle and Wenzler won No. 7 to go 1-up before the two sides tied nine consecutive holes with par. A birdie for Castle and Wenzler on the par-3 17th closed out the match in their favor by a 2-and-1 margin.

Rosenberg and her Tulane teammate Carlota Palacios of Spain grabbed the final match play position by surviving a 5-for-1 playoff that concluded Monday morning with a birdie on the par-3 14th hole. The duo had a back-and-forth match against co-medalists and top-seeded Paris Hilinski of Palm Beach, Fla., and Alexa Pano of Lake Worth, Fla., as the two sides tied just four holes. After trailing early, Rosenberg and Palacios won Nos. 4-7 to take a 2-up lead, but Hilinski and Pano won three of the next five holes to reclaim the lead. A birdie on the par-4 13th for Rosenberg and Palacios tied the match once again, but wins on Nos. 15-17 sent the top seed to the Round of 16.

“The biggest thing was having Kaitlyn save par numerous times," Gianchandani told the USGA after round one. "When I was out of the hole she had tough shots and she was clutch in those situations. That saved us many strokes and resulted in many pars on the scorecard.”

The duo stood at even par for their second round on Sunday following a bogey on the 13th hole, but three birdies over the final five holes quickly moved them into a tie atop the leaderboard. Gianna Clemente of Warrne, Ohio and Avery Zweig of McKinney, Texas--the youngest side in the field at 13 and 14 years old, respectively--also posted a pair of 69s, while Paris Hilinski of Palm Beach, Fla., and Alexa Pano of Lake Worth, Fla., carded rounds of 70-68 for their 6-under total over two days.

“This is absolutely amazing,” said Gianchandani. “We have dreamed of this moment. We have played in USGA championships before and have strived to do this. We are over the moon that we get to hold the medalist title.”

Jennifer Rosenberg of Laurel Hollow, N.Y., and her Tulane teammate Carlota Palacios of Spain shot 5-over 77 in Saturday's first round, but bounced back with a 1-under 71 on Sunday. Their 4-over total placed them in a 5-for-1 playoff for the final spot in match play. A birdie on the first playoff hole followed by a pair of pars left Rosenberg and Palacios in a 2-for-1 playoff that resumed Monday morning. They made quick work of their fate though, making birdie on the par-3 14th hole to secure the No. 32 seed. They'll tee off against Hilinski and Pano at 11:24 a.m. (EDT).

Gianchandani and Lee, who took the No. 2 seed, will face Jensen Castle of West Columbia, S.C., and Marissa Wenzler of Dayton, Ohio in Monday's Round of 32, teeing off at 11:36 a.m. (EDT).

ELMSFORD, N.Y. (April 22, 2021) -- The USGA's 2021 championship season begins this weekend with the 6th U.S. Women's Amateur Four-Ball Championship at Maridoe Golf Club in Carrollton, Texas, where a number of Met Area competitors will look to jump start their competitive season as well. Sides will play 36 holes of stroke play over Saturday and Sunday, with the top 32 advancing to match play and a winner scheduled to be crowned on Wednesday, April 28.

Ami Gianchandani of Watchung, N.J., and Kaitlyn Lee of Scarsdale, N.Y., tee off at 10:42 a.m. (all times listed EDT), Saturday. The duo will no doubt be eager to tee it up in competition as their Yale women's golf team has not competed in Ivy League play since March of 2020 due to the COVID-19 pandemic. The duo qualified for the championship alongside Alexis Hios of Rye, N.Y., and Noelle Maertz of Clark, N.J., in a qualifier at Fiddler's Elbow Country Club. Both sides emerged from a 3-for-2 playoff to secure their spot in the field. Hios and Maertz tee off at 1:06 p.m., Saturday.

Fourteen-year-olds Angelina Kim of Tenafly, N.J., and Claire Lu of Edison, N.J., make up the second-youngest side in the championship. The duo gained entry after shooting 2-under 70 and finishing as first alternate at Timberlin Golf Club in Berlin, Conn.