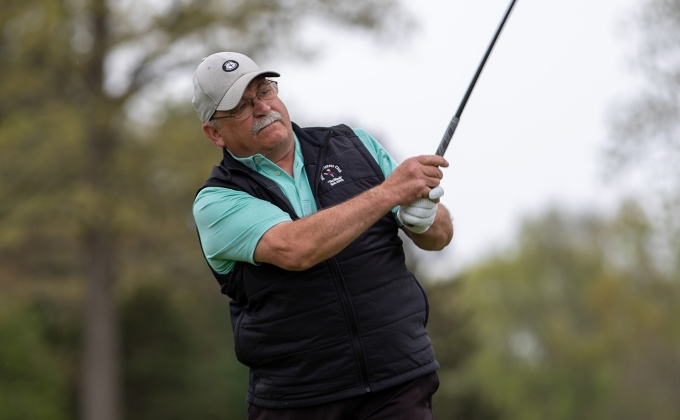 GREENWICH, Conn. (May 3, 2021) -- Dennis Lynch of Nassau Players Club shot an even-par 71 on Monday morning to capture the morning lead in the 94th MGA Senior Amateur Championship at Round Hill Club.

Lynch carded a trio of birdies to offset three bogeys during his morning play. He turned in 1-over 36 but made birdies on Nos. 15 and 17 before closing with bogey on the final hole.

“I just stayed aggressive out there. I went at almost every flag," Lynch said. "Got on in two on the 15th, had about 10 feet for eagle, so I made birdie there and was fortunate to make another on the long par 3.”

The solid start puts him in a great position for tomorrow's final round. Lynch acknowledges that for a tough course like Round Hill, it can be very easy to make a mistake or two and focus for all 18 holes is key.

“On a course like this it’s important to start strong, you can make a quick double on any of these holes," Lynch explained. "It was good to keep it around par today.”

Roddy McRae of Baltusrol had an up and down first nine with three pars, three birdies and three bogeys. But after making a bogey-five on the 10th he reeled off eight consecutive pars to end his round at 1-over 72.

Reigning LIGA Senior Player of the Year Dave Scialabba of Meadow Brook posted a 2-over 73, while six players registered 3-over 74s.

“I thought the conditions were very challenging and the pin placements were tough," Scialabba said. "The course set up was fair but difficult.”

Scialabba has recorded a few top-10s at this event in the past and is excited about being in the mix for tomorrow's final round.

"I'm looking forward to playing tomorrow. I didn’t really know the course very well, I only played about 14 holes here a few weeks ago, so I think I learned a few things today that will be useful for tomorrow.”

Past champions Ned Zachar of GlenArbor and Jim Graham of Winged Foot lead a group of seven players in at 4-over 75 from the morning.

Following Monday's opening round a cut will be made to the low 40 scores plus ties and anyone within five shots of the lead.