Mayer is Inaugural MGA Junior Player of the Year

Mayer is Inaugural MGA Junior Player of the Year 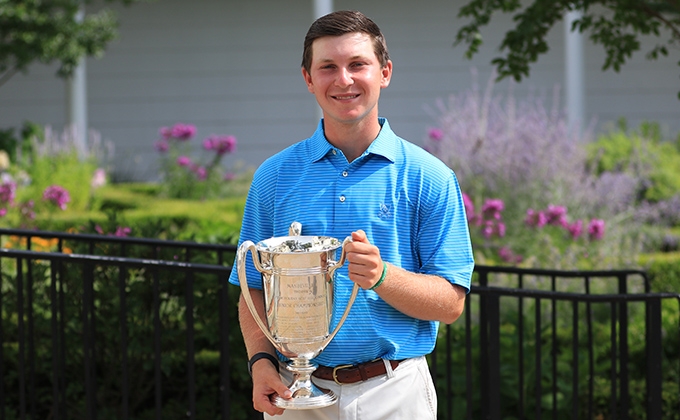 ELMSFORD, N.Y. (October 6, 2017) – Following the season-long points race for Met Area juniors, the Metropolitan Golf Association is pleased to announce Jake Mayer of Scotch Plains, N.J., as the inaugural recipient of the MGA Junior Player of the Year Award, Presented by Callaway. Mayer was on top of his game when it counted the most, as spectacular performances in a four-week span allowed him to earn the honor. Mayer will be recognized for his accomplishment at the MGA’s 120th Annual Meeting and Dinner on Wednesday, December 6 at Westchester Country Club in Harrison, N.Y.

The MGA Junior Player of the Year Award, Presented by Callaway was established to recognize excellence among the highly talented junior competitors in the Met Area, with an emphasis put on the region’s top junior events including the Met Junior Championship Sponsored by MetLife and the Carter Cup, the MGA’s junior stroke play championship. Similar to the MGA Jerry Courville Sr. Player of the Year Award, a season-long points race helps determines the recipient.

After a quiet start to the season, Mayer’s schedule picked up in the heat of the summer. Mayer, a Pingry School graduate who is now in his first semester at Princeton University, quickly put himself among the top contenders for the award, finishing tied sixth in the New Jersey State Open for 110 points.

Mayer’s game remained in top form the next week as he solidified his position as a front-runner for the new and coveted honor, winning the historic 100th Met Junior Championship on his home turf at Plainfield Country Club. Mayer first earned the No. 12 seed through stroke play qualifying. Then after a nail-biting 1-up victory in his quarterfinal match, Mayer posted dominating 5-and-4 and 7-and-6 victories to hoist the Mandeville Trophy and earn a whopping 250 points.

His impressive run didn’t stop there. Mayer finished as runner-up in New Jersey’s W.Y. Dear Junior Championship, then logged a fourth-place finish in the Carter Cup at Baltusrol—earning him another 90 and 100 points, respectively, and practically cementing his position atop the points listing.

While several point-eligible events remained, no competitor was able to eclipse Mayer’s 550 points for the season.

“The MGA is rooted in such incredible history and it’s so cool to look back at past champions of events and the player of the year award,” Mayer reflected. “To know that my name will always be first on the list of Junior Player of the Year Award recipients is an incredible feeling. I can’t wait to watch names get added to the list each year.”

In January, the MGA welcomed Callaway—makers of the #1 selling driver, fairway woods and irons in 2017—as the Association’s newest championship partner. Elements of the partnership included Callaway tying its name to some of the country’s oldest and most prestigious regional championships including the Met Open, MGA Senior Open and Ike championships, and becoming the launch sponsor for the MGA’s first-ever Junior Player of the Year Award.