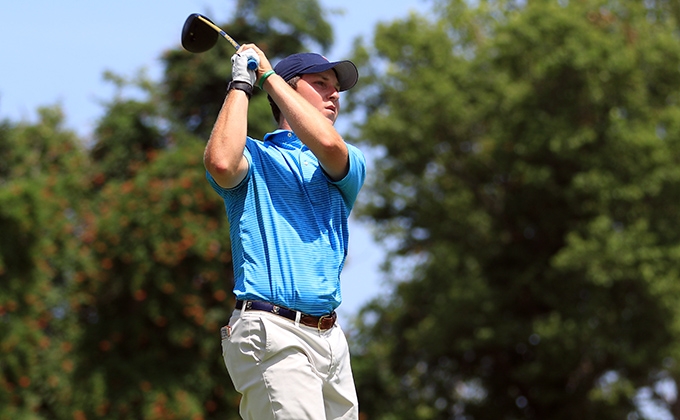 EDISON, N.J. (July 21, 2017) – It was a special celebration for Jake Mayer of Scotch Plains, N.J., Friday, as the 18-year old claimed a 7-and-6 victory over Will O’Neill of Morristown, N.J., to win the 100th Met Junior Championship Sponsored by MetLife on his home turf at Plainfield Country Club, where the championship’s roots were planted in 1912.

“I think I remember seeing that it was going to be at Plainfield last summer—early on in the summer—and I immediately just marked that down in my calendar,” said Mayer, who will attend Princeton University this fall. "It’s all I’ve been focusing on for the last couple months. So, to win it is honestly surreal, and to do it at Plainfield, it doesn’t get any better than that.”

Mayer, who opened the day with a 5-and-4 semifinal victory over Jack Maguire of Ridgefield, Conn., kept momentum moving in the afternoon’s championship match—even as temperatures exceeded 90 degrees for the third consecutive day. A birdie on the par-three 2nd hole quickly placed him 2-up and set him well on his way to victory.

After three-consecutive halves, Mayer continued his steady play as pars on Nos. 6 and 8 and a birdie-four on No. 7 earned him three-straight wins and a commanding 5-up lead through eight holes.

O’Neill registered a 5-and-4 win over Shane DeVincenzo of Port Jefferson, N.Y., in his morning semifinal, but found his game to be just off the mark in the afternoon. After Mayer won No. 11 with a par-four, he closed out the match in style on the par-three 12th.

“I’m never going to forget that shot I hit on 12—it was just so special,” said Mayer. “I had the tee and I had birdied that hole this morning, but early on in the week I think I doubled it twice. It was giving me a lot of trouble, so I just took a seven iron—I took less club, I knew I’d have a lot of adrenaline—it was the right choice because I hit to like two feet. To make that putt was such a cool feeling.”

The two-foot putt sealed the 7-and-6 victory and also secured Mayer’s place both in the championship’s esteemed history and on its prestigious Mandeville Trophy alongside names like Eugene Homans, Frank Strafaci, Butch Harmon, and more recently David Pastore, Michael Miller, and Cameron Young.

While Mayer’s play was exceptional through the week, having the championship take place at his home club gave him a little extra motivation and support as he set his eyes on the title. “It kept everything lighthearted all week,” said Mayer the encouragement he received from the membership all week. “It was just fun seeing familiar faces. You don’t really get that a lot when you’re traveling. To have it at your home course and have all these people come out and want you to play well, it’s just such a special feeling and really means a lot to me.”

This 100th Met Junior marked a celebratory occasion, as the MGA become the lone golf association with its Open, Amateur and Junior championships having reached the century mark. The Met Junior was established in 1912 behind the efforts of Plainfield’s very own Leighton Caulkins, who welcomed the championship to Plainfield each of its first three years. A celebratory dinner was held at Plainfield on Tuesday night, as past champions and this year’s field joined together to honor the event’s rich history. “It’s so cool—it was started here and we have a couple members who won it,” said Mayer following his win. “Just to be in their company is so special.”

Plainfield was a spectacular host as the championship made its return and took place on the outstanding Donald Ross layout. As a founding member of the MGA, the club has long been a longtime supporter of the MGA’s championship programs and is one of 16 Met Area clubs to have hosted the MGA’s three major championships—the Ike, Amateur, and Open. It is also a great advocate of junior golf, easily displayed in their support of The First Tee of Metropolitan New York’s Plainfield location.

With his victory, Mayer was extended a special invitation to the 15th MGA Carter Cup from the Championship Committee. The 36-hole stroke play event takes place August 2 at Baltusrol Golf Club in Springfield, N.J.