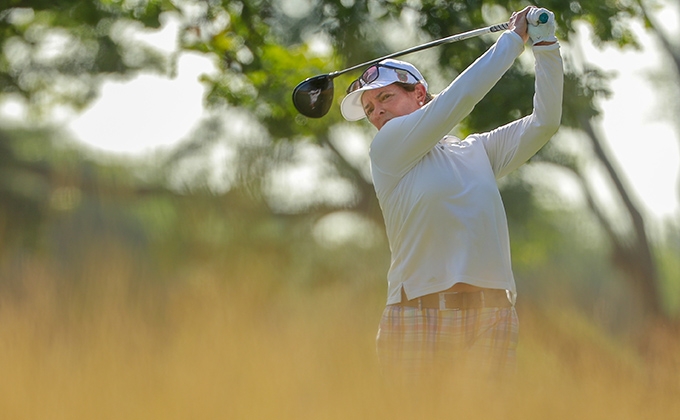 ELMSFORD, N.Y. (May 20, 2019) -- After posting an even par 71 in her second round at Pine Needles Lodge and Golf Club, Alicia Dibos made the 36-hole cut at the U.S. Senior Women’s Open on Friday afternoon.

Dibos, the Director of Instruction at Winged Foot Golf Club, recorded rounds of 80-77 over the weekend to finish at 27-over and in a tie for 42nd. Last year, Dibos finished in a tie for 12th, which was good enough to earn her an exemption into this year’s event.

Dibos was the lone Met Area player to make the cut. There were seven competitors from the Met Area in the field of 120.

ELMSFORD, N.Y. (May 15, 2019) -- After a spectacular inaugural event in 2018 at Chicago Golf Club, the 2nd U.S. Senior Women's Open Championship moved up a couple of months and this week takes place at Pine Needles Lodge & Golf Club in Southern Pines, N.C., with several Met Area representatives in the field.

Winged Foot Golf Club Director of Instruction Alicia Dibos of Greenwich, Conn., was exempt into the championship following her tie for 12th last year. Dibos, a native of Peru, recalled the experience as a career highlight and is looking forward to once again vying for a top finish in the championship.

Meanwhile, several players qualified for the championship on April 29 at Green Brook Country Club, including Century Country Club's C.J. Reeves of Bedford, N.Y., who is also making her second start in the championship. Canoe Brook Country Club Director of Instruction Christine Reuss of Staten Island, N.Y., claimed co-medalist honors alongside Canada's Julie Piers, who has roots in the Met Area having grown up in northern Westchester and attended John Jay High School and took up the game at Waccauc Country Club. Kelley Brooke of New York, N.Y., Director of Golf at Bethpage State Park, also advanced from the site after narrowly missing qualifying for the inaugural championship.

Christine Reuss, the Director of Instruction at Canoe Brook Country Club, will be playing in her first USGA Championship at the U.S. Senior Women's Open in May.

Engineers Country Club's Jean Bartholomew of Garden City, N.Y., was also exempt into the championship as a four-time winner of the LPGA Teaching and Club Professional National Championship and will make her second start. Marjorie Jones of New York, N.Y., earned her spot in the championship through sectional qualifying in Massachusetts to earn her first start in the event.