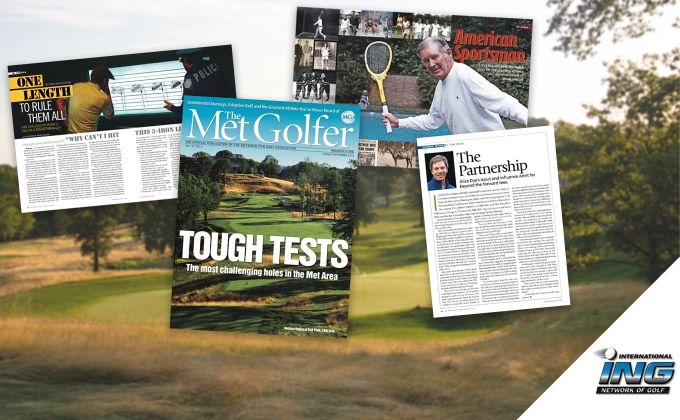 ORLANDO, Fla. (January 22, 2020) — The Met Golfer, the official magazine of the Metropolitan Golf Association, led all media outlets at the 26th International Network of Golf (ING) Media Awards, collecting eight writing awards. A total of 47 awards across 13 categories were announced as part of Wednesday's presentation at the PGA Merchandise Show, with writing awards representing 36 of the honors in eight categories.

All eight of The Met Golfer's awards were Outstanding Achievers:

Opinion & Editorial
Tom Doak – "The Partnership"
Jeff Neuman – "Whose Game is it Anyway?"

The International Network of Golf, a non-profit, media-based networking organization, conducts the awards program for its members. ING membership is open to anyone in the golf industry and media. An independent panel of three judges in each category determines first-Place Winners and Outstanding Achievers.  Judges use a point system with several criteria. Scoring is done by judges when possible without knowledge of the person responsible for the work, or of the other judges in the category. The number of Outstanding Achievers in a category is determined by total entries and scoring range in the category.