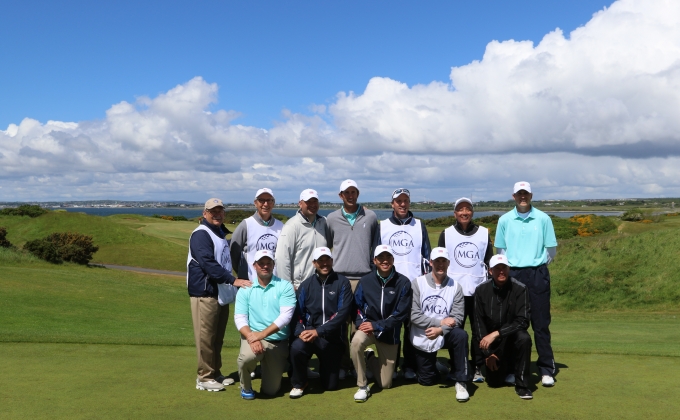 UPDATE: ORANMORE, IRELAND (May 18, 2017, 1:30 pm) - The Golfing Union of Ireland and MGA finished the 14th Governor Hugh L. Carey Challenge Cup in a tie as each side claimed six points, allowing the GUI to retain the Cup.

The MGA won two points early during Thursday's singles matches after Darin Goldstein got off to a hot start and defeated Alex Gleeson 4 & 3. "The short game was key for me today," said Goldstein.
"I got up and down four times on the front nine to build a little lead, and kept it going on the back."

Ethan Ng took on the GUI's Mark Power and added a point for the MGA when he sunk a 20-foot putt on 17 to win 3 & 2.  "I was happy with how solid I played today. Yesterday I was not putting very well so I really tried to focus on that today," the youngest member of the team said. "I made a few mid-range putts from 10-12 feet, and then I made a couple of longer putts, especially on my last hole, that obviously really helped." Ethan won his foursomes match yesterday morning when he teamed up with Tyler Cline.

Cline contributed to two of the MGA's points yesterday but struggled in his singles match against Jonathan Yates. Yates gave the GUI a point as he defeated Cline 3 & 2.

Trevor Randolph won the MGA's third point and final point from singles play. He went to 18 against Kevin LeBlanc but closed out the match to secure the sixth point for the MGA. "I really picked up momentum on the back nine," Randolph said. "I was 2-under par and just kept going for fairways and greens. I was trying to be patient and it paid off on 10, 11 and 12, which I played in 1-under. That was really the turning point, I went from 1 down to 2 up."

Brian Komline held strong on the first nine, but it was the inward nine where the GUI's Conor O'Rourke picked up momentum and ultimately won another point for the GUI. Stewart Hagestad helped win a point for the MGA during play on the opening day, but the GUI's Colm Campbell started quickly during the duo's singles match. Hagestad was unable to rally, with Campbell closing out the match 4 & 3.

The tie is just the second in the event's 14 playings, allowing the GUI to retain the cup thanks to their 2015 win at Metedeconk National. The GUI now owns an 8-4-2 advantage all-time in the series, though the record stands square at 2-2-2 since 2007. The 15th Governor Hugh L. Carey Challenge Cup will be played in the U.S. in 2019.

MGA President Michael Sullivan and Jay Mottola co-captained this year's MGA team. Sullivan was busy this week, he also caddied for Stewart Hagestad in all three matches. "We had a really great week with our team and the GUI at Galway," Sullivan said.  "The spirit of the competition and the camaraderie between the two teams always exceeds expectations. It was a really unique opportunity to be able to caddie for Stewart this week and be amongst the players. The entire team had such a great time here. We'll look forward to welcoming the GUI back to the U.S. in two years."

Sullivan was not the only captain to pull double duty at Galway, as Jay Mottola caddied for his fellow Tuxedo Club member Tyler Cline. MGA Executive Director Brian Mahoney carried for Trevor Randolph, and past Carey Cup team member and MGA Executive Committee member Dennis Lynch did the same for Brian Komline.

ORANMORE, IRELAND (May 17, 2017, 8:00 pm) - After the first day of the Carey Cup, the MGA and GUI are tied with 3 points apiece. Wind challenged players in the afternoon fourball matches, which the GUI led 2-1.

After a back-and-forth match, Brian Komline and Tyler Cline began to make moves late on the back nine. Komline birdied the 15th hole to go 1 up, but Alex Gleeson from the GUI answered that with an eagle on 16. All square going into 17, Cline made par which won them the hole after Gleeson struggled off the tee. Cline made another par on 18 to halve the hole, which won Komline and Cline the match and gave the MGA another point.

Colm Campbell and Mark Power won the GUI a point when they defeated Stewart Hagestad and Ethan Ng, 3 & 2. Trevor Randolph and Darin Goldstein had a tough time battling the GUI's Conor O'Rourke and Jonathan Yates, and the GUI secured their third point when O'Rourke and Yates won on the 14th hole.

Thursday's six singles matches will decide who win the cup. The matches will start at 8:30 am. Follow along with the MGA on Twitter and Instagram (@MGA1897) during the final matches for updates.

ORANMORE, IRELAND (May 17, 2017) -- The 14th Governor Hugh L. Carey Challenge Cup has officially begun at Galway Bay Golf Resort. The MGA is off to a great start and leads the GUI 2-1 after morning foursome matches.

Stewart Hagestad and Darin Goldstein played together in the morning and took a commanding lead from the start of the match. Goldstein chipped in on the ninth green to get their match to 4-up at the turn. Both Hagestad and Goldstein's precise short games helped them around the greens through a windy morning at Galway, and they put the first point on the board for the MGA when they defeated Alex Gleeson and Kevin LeBlanc 2-up.

The MGA's two youngest team members, Tyler Cline and Ethan Ng secured a second point for the MGA when they defeated Colm Campbell and Mark Power 3 & 2 this morning. Cline said their putting was what really helped them out and allowed them to keep the lead during their match.

A Carey Cup Veteran, Brian Komline teamed with Trevor Randolph this morning. They led early in the match and made the turn at just 1-down, but it was ultimately Conor O'Rourke and Jonathan Yates from the GUI who won the match 2 & 1.

Four-ball matches will take place this afternoon, followed by singles matches on Thursday.

Four-Ball will begin at approximately 1:00 p.m. local time, 8:00 a.m. Eastern, with the pairings yet to be decided.

ELMSFORD, N.Y. (May 15, 2017) -- Team MGA is ready to take on the Golfing Union of Ireland in the 14th Governor Hugh L. Carey Challenge Cup this week, with play taking place May 17-18 at Galway Bay Golf Resort in Oranmore, Ireland.

Though the GUI prevailed in the 2015 meeting at Metedeconk National Golf Club in jackson, N.J., the MGA will be eyeing its third win in the last four matchups, having won in 2011 and again in 2013, which marked the MGA's first ever victory on foreign soil. The Walker Cup-style competition features Foursome and Fourball matches on day one of competition and concludes with Singles matches on day two. The event is preceded by an "Am-Am" on May 16, in which each of the GUI and MGA players will be paired with three amateurs in a best ball competition.

The Carey Cup was originally called the Metedeconk International Challenge Cup and was first played at Metedeconk in 1990. The teams played once again in Ireland in 1992 but did not meet in 1994. In 1996, the matches were conducted once again—an effort spearheaded by the late Governor Hugh L. Carey who envisioned the matches as an opportunity to foster sportsmanship and goodwill between the countries. Ever since, the matches have been played in his honor with a spirit of camaraderie and competition.

Galway Bay Resort hugs the Atlantic coastline in western Ireland, creating a truly incredible setting for championship golf. The links style course demands precision while playing exposed to sweeping winds off the bay. Several water hazards and cleverly concealed bunkers add to the challenge of the course, which is known for its finely conditioned fairways and greens.

The MGA will provide updates from Ireland, both through its social media channels and right here on mgagolf.org.