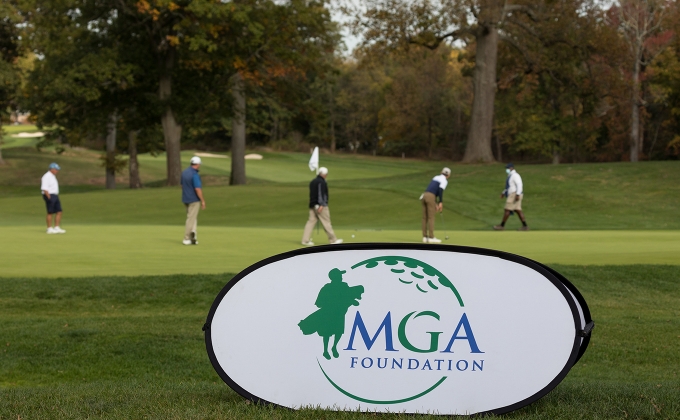 SCARSDALE, N.Y. (October 23, 2020) -- The biennial French-American Challenge Matches may have been postponed for 2020, but the MGA Foundation this fall still celebrated the camaraderie that typically comes with the international matches. On earlier this week, past international team members and supporters came together for a wonderful day of golf with the first-ever Fall Founders Challenge at Quaker Ridge Golf Club in Scarsdale, N.Y.

“It doesn’t get better than fall ball with friends—new and old—at such a special Club,” said Johanna Gavin, MGA Foundation Director. “The MGAF is grateful to have closed our 2020 season with the Fall Founders Challenge at Quaker Ridge. We left excited about new friendships, excited about next season and excited about the game.”

Three-time MGA international team member and current Korn Ferry Tour player Mike Miller participated in the event and reminisced on his experience, saying, "It's awesome to get to represent the MGA. I owe the MGA a lot and to be able to come back and play in support MGA is great."

With our French-American Challenge matches postponed for 2020, we hosted the first-ever Fall Founders Challenge on Monday, welcoming international team alumni & supporters for a wonderful day of golf at Quaker Ridge Golf Club.

Thanks to everyone for their support! pic.twitter.com/jhIAh0Uxtr

The field of teams were split into "Team MGA" and "Team International" with the low combined score going in favor of Team MGA. Two-person teams were also competing for gross and net finishes, with Miller and past Met Amateur champion Pat Wilson pairing up to take low gross honors (-4) and Mike Corcione and Glenn Goldberg earning the low net title (-6).

Participants also had the chance at prizes for closest to the hole and longest drive thanks to Callaway Golf, in addition to a Lexus opportunity for a Hole-in-One.

Quaker Ridge has long supported the MGA and MGA Foundation, standing as one of 18 clubs to have welcomed all three of the MGA's majors--the Ike, Met Amateur and Met Open. The Club welcomed the Carey Cup in 2003 and this fall would have become the first club to host both the Carey Cup and French-American Challenge Matches. Supporters thoroughly enjoyed the fun and challenge of playing the A.W. Tillinghast layout.