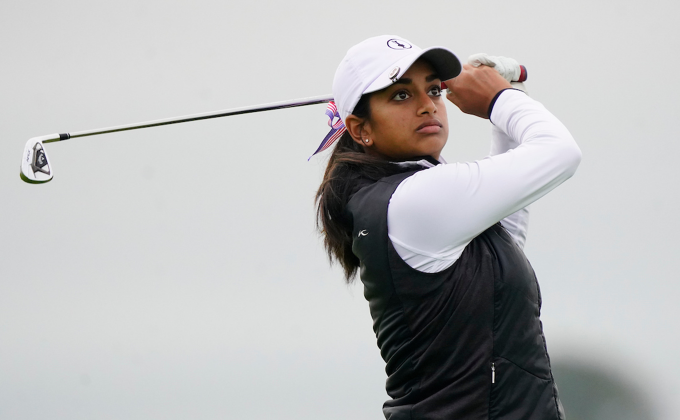 Megha Ganne and partner Ina Kim-Schaad went 2-0 during day one at the 16th Carey Cup.

COUNTY KILDARE, IRELAND (October 12, 2021) -- If decades of international competition have taught us anything, it’s that nothing is certain and most of what we know and expect is wrong. American golfers are generally expected to be better in four-ball matches, the form we play most weekends, and weaker in the alternate-shot foursomes, a format rarely used on the western side of the Atlantic Ocean.

So of course, the MGA side won 3 ½ points out of 5 in the morning foursomes, and then was on the short side of the same score in the afternoon, leaving the 2021 matches for the Governor Hugh L. Carey Challenge Cup in a 5-5 tie entering the Wednesday singles.

This is a year of change in the Carey Cup. There’s a new name and a new organization governing golf in Ireland, simply called Golf Ireland, which unified the Golfing Union of Ireland and its Ladies equivalent under a single banner. For the first time, the teams went from six men per side to six men and four women beginning in 2021, a welcome expansion in light of the growth of women’s participation in golf in the Met Area and worldwide.

The MGA’s leadoff pair, Ina Kim-Schaad and Megha Ganne – respectively the 2019 U.S. Women’s Mid-Am champion and the low amateur at the 2021 U.S. Women’s Open – was the only twosome to capture points in the morning and afternoon sessions, winning both matches handily. “Megha’s back nine was flawless,” Kim-Schaad said after their four-ball victory.

In the morning foursomes, it looked for a while like the MGA would run away with things, but as they inevitably do in international competition, things quickly turned tight. Two-and-a-quarter hours into the competition, the MGA was 4-up in two matches, 3-up in two others, and all square in the fifth. Ganne and Kim-Schaad had trailed Aideen Walsh and Paula Grant after the first 5 holes but burst through with five consecutive wins, then held on for a 3-and-2 victory. Trevor Randolph and Mark Costanza made short work of Jake Whalen and David Kitt, winning 5 and 4 and going under par in the alternate-shot format.  Darin Goldstein and Brad Tilley were steady, taking their match 2 and 1.

Alexis Hios and Noelle Maertz held a three-hole lead in the early going, but clutch putting from the Golf Ireland pair of Kate Lanigan and Rachel Thompson cut the lead to one with two to play.  On 17, The Irish player put her tee ball within two feet of the hole, and Hios could not make her tricky 12-footer for the tie, squaring the match. Ireland got a solid two-putt par on the final hole, while Maertz’s second shot flirted with the water hazard on the right, and Hios’s recovery shot stayed short of the putting surface. Maertz pitched to about six feet, but Hios’s par putt slid by the hole, giving Golf Ireland its first point of the session. And in the last match out on the course, Garett Engel and Sam Goldenring sparred with Hugh Foley and Richard Knightly in a battle that was tight from start to finish. Foley and Knightly led as they played 18; Goldenring’s second on the par-five ran past the flagstick and down the slope to the right, while the Irish side was left of the green in the gathering of spectators. They faced a touch pitch downhill to a green running away towards the water, and did well to leave the ball sixteen feet above the hole.  Engel pitched up beautifully to 8 feet, and after Golf Ireland missed their birdie putt, Goldenring rolled his home for a vital half-point and a 3 ½ - 1 ½ MGA advantage.

The afternoon matches were a matter of turnaround for everyone other than Ganne and Kim-Schaad.  At the same two-and-a-quarter hour mark, Golf Ireland led in four of the five matches. Whalen and Kitt caught fire for Golf Ireland, handing a 5-and-4 defeat the pair that had beaten them by the same margin in the morning, Costanza and Randolph. Goldstein and Tilley lost 3 and 1 to Rob Moran and Marc Boucher. And the pair of Goldenring and Engel were unable to catch Foley and Knightly this time around, as the 17th and 18th were tied with birdies (including Engel’s near ace on 17).

But a vital half-point for the MGA came from a redemption tale for Hios on 18. Lanigan and Thompson led throughout, but the Hios and Maertz kept chipping away at the lead. “It was such a grind,” Maertz said afterwards.  Solid play gave the Irish side, leading 1-up, a sure par; with Maertz out of the hole, Hios faced a 35-footer for birdie to even the match. The pace was perfect and the ball disappeared into the cup. The tied match felt like a win for the MGA pair, and within half an hour the length of the putt was already growing to 50 feet in the retelling.

So the day concluded with the MGA and Golf Ireland dead-even at 5 points apiece. In the last three matches combined, the MGA’s edge is 17 ½ to 16 ½. Wednesday’s ten singles matches will determine whether the Carey Cup remains in MGA hands.