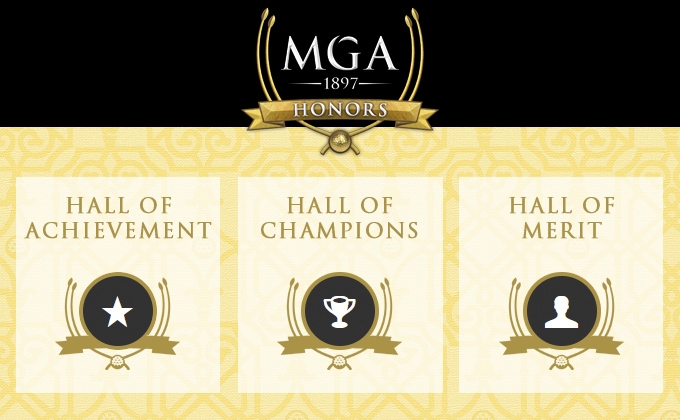 In 2019, the Metropolitan Golf Association introduced MGA Honors as a platform dedicated to celebrating and showcasing the rich history of the MGA and golf in the Met Area. Its online archive houses three elements that honor award winners, champions, and contributors to the game:

• Hall of Achievement: Recipients of the MGA’s highest honor, the Distinguished Service Award, and the Player of the Year Awards.
• Hall of Champions: Winners of the MGA’s oldest and most prestigious championships – the Met Open, Met Amateur, Ike Stroke Play, and Met Junior.
• Hall of Merit: The Hall of Merit singles out those with ties to the Met Area whose contributions to golf—not only in the region—are so large that the story of the game cannot be told without them. They shaped the game in many ways: as players, teachers, organizers, architects, entrepreneurs, inventors, writers, leaders.

Each year, the MGA Awards Committee selects a number of honorees for induction to the Hall of Merit. The inaugural class welcomed A.W. Tillinghast, Marion Hollins, Ben Hogan and the MGA’s Founding Fathers (the five men who devised the MGA’s constitution and bylaws in 1897).

In 2020, the MGA recognized a trio of figures from the game’s early days in America, as well as a man who captured some of the finest images of golf’s biggest stars:

• John Matthew Shippen, Jr.: A former caddie who shattered societal barriers to become the first African American golf professional as well as the first American-born golf pro to compete in the U.S. Open.
• Charles Blair Macdonald: A renowned architect with especially strong representation in the Met Area who was also a visionary (prime motivator behind the formation of the USGA) and champion (winner of the first U.S. Amateur).
• Genevieve Hecker-Stout: A two-time U.S. Women’s Amateur winner and four-time Women’s Metropolitan Golf Association champion who wrote Golf for Women and contributed to the magazine Golf.
• Jules Alexander: A universally admired lifetime photographer whose greatest fame came in golf through iconic photos that produced The Hogan Mystique and Tiger Woods in Black and White.

In an ordinary year, inductees are spotlighted in the year’s fifth and final issue of The Met Golfer and at the MGA’s Annual Meeting and Dinner. The 2020 class was recognized as part of the MGA’s virtual year-end celebration and special release of year-end content.

We encourage MGA members to explore the Honors archive and learn more about each inductee through profiles, photos, and videos.