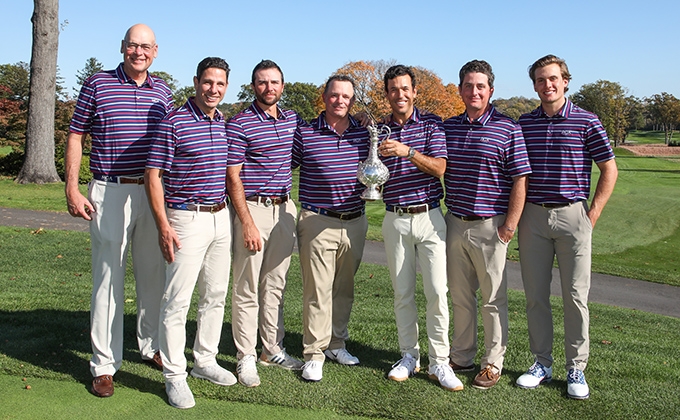 PARAMUS, N.J. (October 23, 2019) ⁠— The script couldn't have been written any better. With the MGA and Golfing Union of Ireland tied 5.5 to 5.5 in the 15th Governor Hugh L. Carey Challenge Cup, it all came down to the final putts of the final match at Arcola Country Club, with the host club's very own Trevor Randolph looking to complete a stunning comeback and secure the Cup for the MGA.

While both Randolph and Rowan Lester scrambled on the challenging par-4 18th that played straight into the wind, Randolph poured in his 12-footer for bogey. With a chance to win the hole and tie the final match for an overall tie, Lester's eight-foot par bid slid by, sparking celebration for the MGA as it won its first Carey Cup since 2013 at The European Club.

"Coming up 18, someone said something to me about it coming down to the short games of Trevor versus his opponent," said MGA President Tod Pike, who captained the team. "I said I wouldn't want it in anyone else's hands. We put Trevor out last for a reason and he really came through in the clutch and showed what he's made of."

The MGA faced a 4-2 deficit following Tuesday's four-ball and foursomes matches, but Randolph's 1-up victory helped the MGA capture 4.5 of the 6 available singles points on Wednesday to seal the comeback against a world-class Irish squad.

A furious start to the matches fueled the MGA early on, as recent NYSGA, WGA and MGA Mid-Amateur champion Brad Tilley of Sleepy Hollow birdied 8 of 11 holes to make quick work of Conor Purcell by an 8-and-7 margin. Despite falling down two holes early on, Thomas La Morte found his swing and birdied seven holes in a nine-hole stretch en route to a 6-and-4 victory over Caolan Rafferty.

"They put out their three Walker Cup players first," said Pike, speaking of the GUI's Purcell, Rafferty and 2019 British Amateur champion James Sugrue who all represented Great Britain & Ireland against the United States last month and stand inside the top 35 in the World Amateur Golf Ranking. "But, once we got through the first two of those three, we knew that the game was on."

James Nicholas of Westchester and Sugrue had a back-and-forth battle down the stretch, trading Nos. 13-16 to stand tied with two holes to play. But, Nicholas — playing in his final event as an amateur — closed with a pair of pars on the challenging finishers to earn the 2-up victory.

"It came down to literally one stroke and it was good to be on the right side of that."

The GUI's Peter O'Keeffe edged Darin Goldstein of Deepdale, 2 and 1, earning the GUI its first point of the day and pulling the overall score to 5 to 5.

While both Joe Saladino of Huntington and Randolph held late leads, their opponents picked up victories on the 17th and 16th holes, respectively, to tie the matches and keep hopes alive for the Irish.

A clutch up-and-down par for Saladino on the home hole paired with a missed sliding birdie look from 10 feet for Robert Brazill pushed the tally 5.5 to 5.5 and set up the dramatic finish.

Randolph had earned an early 3-up advantage over Lester, but the winner of last week's Nassau Invitational battled back and tied the match through 13 holes. After trading Nos. 15-16, Randolph nearly holed a putt from a collection area to the right of 17 green and safely made par. Lester failed to get up-and-down from the greenside rough right of the green and Randolph took a 1-up lead to the last.

Both players came up right on their long approach shots, with Randolph's ensuing pitch coming up well short and Lester hitting his across the green within eight feet. Randolph's 40-foot par putt stayed wide and left him a 12-footer for bogey. The 46-year-old put a smooth stroke on the look and poured it in with the match on the line. Lester's bid to tie the match, which would have resulted in a 6-6 tie and the GUI retaining the cup, caught the edge of the hole and left the MGA victorious.

"These international competitions mean so much to me personally," said Randolph, who has competed on six international teams for the MGA. "To be involved with getting the Carey Cup to come to Arcola and then to have it end that way is certainly really special to me and is something I won't forget."

The victory makes the all-time record 8-5-2 in favor of the Irish, while the MGA now owns a 3-1-1 lead in the last five playings.

The Carey Cup – which originated as the Metedeconk International Challenge Cup – was first played in 1990. The teams played once again in Ireland in 1992 but did not meet in 1994. In 1996, the matches were conducted again thanks to an effort spearheaded by the late Governor Hugh L. Carey, who envisioned the matches as an opportunity to foster sportsmanship and goodwill between the countries.

Arcola served as an incredible host as it welcomed its first-ever MGA international match. The venue, which hosted the 2018 Met Amateur to high acclaim, tested all facets of the competitors' games, requiring length off the tee, accuracy in approaches to it's contouring greens and a deft touch around and on the greens that roll among the fastest in the Met Area.