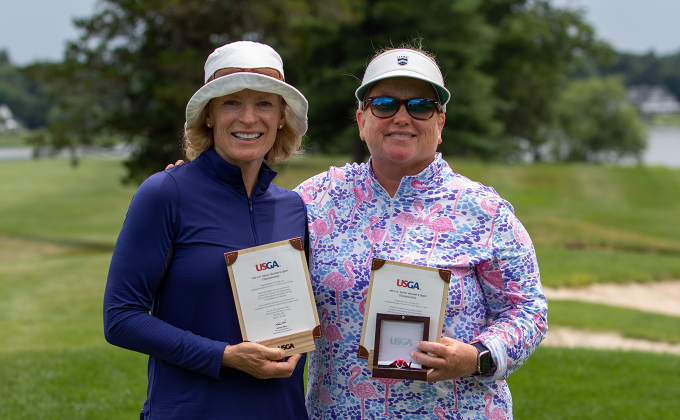 RYE, N.Y. (July 26, 2022) – After some close calls in qualifying for the U.S. Senior Women’s Open Championship, Wendy Modic of Wilton, Conn., punched her ticket to the 4th playing of the championship, Tuesday at Rye Golf Club with a 4-over 76. Michelle Dobek of Chicopee, Mass., also advanced with a 5-over 77, securing her spot in the championship for a second consecutive year.

Modic had a tough start to her round, losing her tee shot after it struck a tree. Despite the opening triple-bogey seven, Modic remained poised.

“I just tried to be patient and knew there was a lot of golf left and hopefully if I stayed positive and patient, I’d be able to hang in there,” said Modic, a professional at Fenway Golf Club in Scarsdale, N.Y.

She settled in and made five consecutive pars before getting a shot back on the par-5 seventh hole. Three bogeys on Nos. 10, 13 and 14, but Modic closed strong with three pars and a finishing birdie to post what was eventually the day’s low round.

While driving the golf ball challenged Modic through the day, her game picked up in other places.

“My driving probably cost me four or five shots, but my short game was good, so it saved me,” said Modic, who is making her fourth start in a USGA championship, having competed in the 1989 U.S. Women’s Amateur and U.S. Women’s Opens in 1993 and 2006.

Her comeback from an injury last fall makes securing her spot this year even more special.

“I had a pretty bad injury in November,” said Modic. “I tore my hamstring off my pelvis and didn’t walk for eight weeks, so this is nice to be able to do this.”

Meanwhile, Dobek credited her ball striking to her advancing.

“I struck it really well, but I’m just a little rusty on the short game, so, if anything, that cost me a quite a few shots,” said Dobek, who has competed in five U.S. Women’s Opens.

Dobek’s 77 was highlighted by a pair of birdies on Nos. 5 and 7 as she turned in 2-over 39. Three bogeys on the back led to her final tally.

After her experience last year at Brooklawn, Dobek put it simply on her goals this year, saying, “I just want to play well and enjoy the week.”