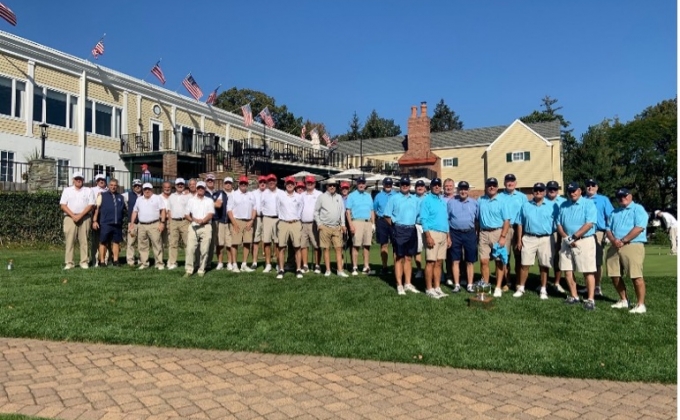 TENAFLY, N.J. (October 21, 2021) - The Triangular Matches are an annual highlight on the calendar for three local Senior Associations: The Westchester Seniors, Long Island Seniors and the New Jersey Seniors Golf Associations. First played in 1927, the purpose of these Matches was to generate goodwill and fellowship, and a contest between senior golfers in the Met Area. For history buddys, the first Triangular Match was hosted at Rockwood hall Country Club in Sleepy Hollow, N.Y. The club was on the site of Rockwood Hall estate, which was owned by the Rockefellers. Unfortunately, the club and buildings no longer exist, and it is now the site of Rockwood Park.

About the Triangular Matches: The Matches rotate each year between Westchester, Long Island, and New Jersey, with competitors from multiplae age groups representing each organization. There is a total of 36 players, with each team composed of 12 players: the association sends their champion, one from Class AAA and two from Classes AA through D.  Each player has two matches against the other organization. Officers and the Team Captain from each association attend the event as officials, but they are not involved in the competition. Each association appoints a Team Captain to organize and manage their team’s participation and select the best courses when their team hosts the matches.

The NJSGA hosted the 94th Annual Triangular Matches on October 21 at Knickerbocker Country Club in Tenafly, N.Y. The home team came out on top, just edging out LISGA by half a point, 37.5 to 37. The current overall standings since its start in 1927 are: WSGA 26, NJSGA 21, LISGA 20. The WSGA will host the 2022 playing at Siwanoy Country Club.