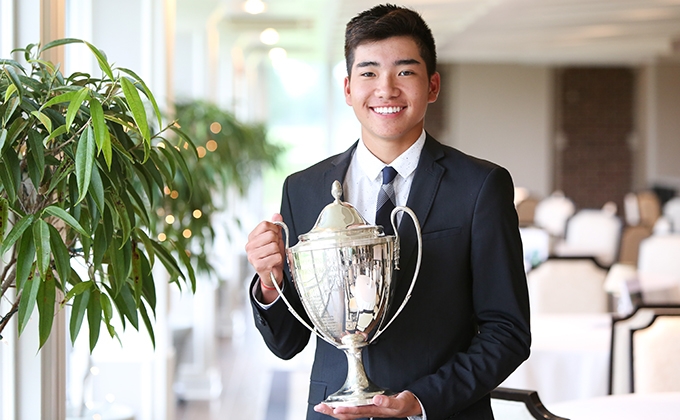 SPRINGFIELD, N.J. (August 2, 2017) – Unstable weather and lingering lightning around Baltusrol Golf Club halted play at the 15th Carter Cup early Thursday afternoon, ultimately leading the event to be shortened to 18 holes, with reigning champion Ethan Ng of New York City taking the title thanks to a morning round of 3-under 68 on the Upper Course.

The victory makes Ng the first-ever two-time champion of the Carter Cup, which is played in honor of accomplished Baltusrol junior player Michael P. Carter who passed following a car accident in 2002. Ng claimed last year’s title in a playoff over Brent Ito at Winged Foot, which welcomed the championship as Baltusrol hosted the PGA Championship.

“It’s a huge honor,” said Ng following the win. “So many great players have played in the Carter Cup, but none have won back-to-back. To be the first, it’s truly an honor.”

Ng, who edged Christopher Lee of Westwood, N.J., by one shot, began his morning round on the 10th hole. Despite back-to-back bogeys on Nos. 14 and 15, Ng bounced back nicely with two consecutive birdies. “It definitely regained my momentum going into the front nine,” said Ng of the birdies, which allowed him to turn in even-par. “I knew that I was going to be able to score on the front nine because there are some scoreable holes—and I did.”

He built momentum quickly, birdieing Nos. 2 and 4 to quickly move to 2-under. Ng credited accuracy off the tee and clutch putting down the stretch for his strong closing nine. “I was just really hitting tee shots well, so I was putting myself in good position,” he said. “I was making a lot of key par putts down the stretch to keep the momentum going.”

Meanwhile, Lee carded three birdies to a single bogey in his round, which also began on No. 10. He also closed strongly, posting birdies on Nos. 8 and 9 en route to the 69.

Brendan Hansen of Spring Lake, N.J., registered four birdies and three bogeys on his way to a 1-under 70 and a solo third finish. Jake Mayer of Scotch Plains, N.J., winner of the 100th Met Junior Championship, followed in fourth with an even-par 71, while Jackson Fretty of Cos Cob, Conn., rounded out the top five with a 1-over 72.

Following the win, Ng is aiming to recreate his run from last year in which he advanced all the way to the final of the Met Amateur. “Hopefully with this win, I can take some of that momentum moving forward with good play in the stroke play portion of the Met Am and move in to match play,” he said.

Play was suspended at 12:17 p.m. as lightning was detected in the area. Threatening weather carried on throughout the afternoon as cells containing lightning continued to pop up, preventing the championship from being played over its typical 36 holes. The championship was also shortened to 18 holes in 2012.