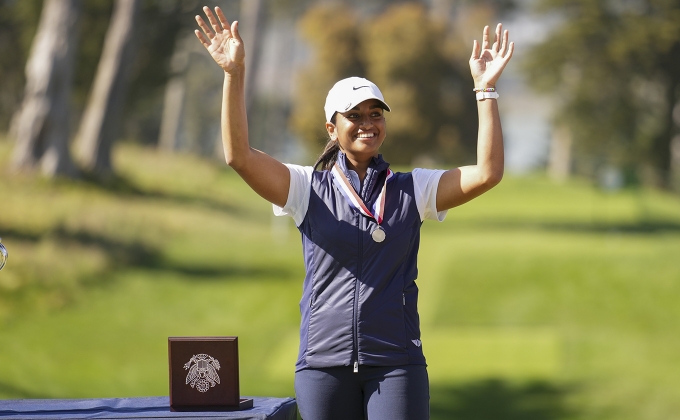 UPDATE (June 6, 2021) -- Despite a tough start to Sunday's final round of the 76th U.S. Women's Open Championship, Megha Ganne continued to grind the entire round, using a late birdie to earn low amateur honors. Ganne posted a 6-over 77 in the final round, finishing tied for 14th at 3-over for the championship.

After registering just one bogey on the first nine the entire week, Ganne struggled early with a double-bogey and bogey on the first two holes. After another double on the par-4 fifth and a bogey on the par-3 eighth, Ganne turned in 6-over. However, the 17-year-old continued to show her poise as she did all week long, playing the rest of her round in even-par.

Ganne made birdie on the par-5 17th, then made a par on the challenging finishing hole to secure low amateur honors, one shot ahead of Maja Stark.

Marina Alex posted a final round 76, finishing the championship tied for 26th at 8-over.

UPDATE (June 5, 2021) -- Megha Ganne continued to impress the golf world on Saturday in the 76th U.S. Women's Open Championship at The Olympic Club, grinding out an impressive 1-over 72 in the day's penultimate group. Her third round performance lands her tied for third at 3-under entering Sunday's final round, during which she'll play in the final group alongside Yuka Saso (-6) and leader Lexi Thompson (-7), teeing off at 1:35 p.m. ET.

"It was really mentally a grind out there and I've never had to just perform from such bad lies and situations hole after hole and still believe that I was going to do it again on the next hole," said Ganne. "So it was a lot, but I'm confident in how I'm playing."

Ganne leads the field in putting for the week, averaging 25.67 putts per round. She had 25 on Saturday, rolling in birdies on Nos. 5 and 9 in addition to a number of crucial par saves.

'There were some putts I made that I normally just don't make and I'm, like, your putting is kind of great right now, so just get it on whenever you can," Ganne described. "You're probably going to make a birdie putt here or there. I was, like, just put it inside 10 feet with these chips and chances are you're going to roll it in. So I wasn't too worried. I just tried to stay calm."

Ganne continued to enjoy the interaction with the crowds and can certainly expect much of the same atmosphere on Sunday in the final group.

"I've played with Lexi a few times, and Yuka and I played a lot of junior golf together and I played my practice round with her and we're super close," said Ganne of her fellow competitors in Sunday's final group. "So I think it will be so fun and I think I'll be comfortable because I know them a little bit, so I'm so excited."

UPDATE (June 4, 2021) -- Megha Ganne followed up her opening round 67 with an even-par 71 on Friday in the second round of the 76th U.S. Women's Open Championship at The Olympic Club, placing her in a tie for third entering the weekend in San Francisco.

"I thought the course played pretty similar," said Ganne, who started on No. 9. "It was a little bit chillier today and there was some fog in the air in the morning, so it was kind of just adding some yards to all the numbers. So it played a little bit longer, but other than that, pretty similar."

Though Ganne had a trio of bogeys over her first 10 holes, she also made birdie for the second straight day on the par-5 16th to give her confidence more were on the way.

"The pin was gettable, just a wedge in hand, so it was pretty ideal to make birdie from there," she said. "Once the first birdie goes, it's like you know more are coming, so it's a good feeling."

She added two more over her final eight holes, converting a sliding left-to-right 15-footer on the par-5 first and a 10-footer on the par-4 seventh hole. A closing par save on the par-3 eighth locked in her even-par round. During the afternoon wave, Yuka Saso fired a 4-under 67 to jump atop the leaderboard at 6-under overall, while 2019 U.S. Women's Open champion Jeongeun Lee6 also shot 67, moving to 5-under for the championship. Ganne sits tied with Meghan Kang, who she will play alongside in round three starting at 5:24 p.m. ET.

Marina Alex remained within the mix with 1-over 72 in the second round, moving her to even-par and tied for 12th entering the weekend. Highlights for Alex, who began her round on No. 9, included a chip-in for par on the par-4 18th and birdies on Nos. 6 and 8 as she closed her round. Alex tees off in round three at 4:29 p.m. ET alongside Danielle Kang.

UPDATE (June 3, 2021) -- Both New Jersey natives in the field filed impressive performances to begin play in the 76th U.S. Women's Open Championship, Thursday, at The Olympic Club, with Megha Ganne firing a 4-under 67 and Marina Alex posting 1-under 70.

The 17-year-old Ganne was as comfortable as she could be on the challenging Lake Course in what was the third U.S. Women's Open round of her rising career. She rolled in early birdies on Nos. 2 and 4 before adding one more on the par-3 eighth hole, where she knocked her tee shot to just a few feet.

Despite a bogey on the par-4 11th, Ganne showed her poise and bounced back by holing an 18-foot birdie on the next. With an Olympic Club member on her bag, Ganne continued her strong play on the greens adding back-to-back birdies on the par-3 15th and par-5 16th to take the solo lead at 5-under. While Ganne gave one shot back on the challenging finishing hole, she currently sits tied atop the leaderboard, matching Mel Reid's 67 from earlier in the day. Ganne is the 6th amateur in the championship's history to shoot 67 or lower and is the first amateur to lead or co-lead since Jane Park did so following round one in 2006 at Newport Country Club.

"Well, I didn't have to try to keep it in the fairway on the par-threes, which made them a little bit easier," said Ganne alluding to the challenging rough while discussing her 2-under performance on the par threes. "I had a flat lie on the tee boxes, which you don't have anywhere else on this golf course. Definitely, I think the par-threes are a little bit easier compared to the rest of the course."

Alex also had a strong start with birdies on Nos. 3 and 6 en route to a first-nine 33. While she added a bogey and a double-bogey on Nos. 12 and 14, the LPGA Tour winner quickly responded with back-to-back birdies of her own on Nos. 15 and 16. She added a two pars coming in to post her 1-under score.

Alex returns to the course at 4:36 p.m. ET on Friday for her second round.

ELMSFORD, N.Y. (June 3, 2021) -- A pair of New Jersey natives stand among the world's top women's competitors teeing it up at The Olympic Club in this week's 76th U.S. Women's Open Championship. While the Club's storied Lake Course in San Francisco has welcomed the U.S. Open five times, this is its first time hosting the U.S. Women's Open. The 17-year-old Megha Ganne of Holmdel, N.J., is making her second start in the championship, while LPGA Tour winner Marina Alex of Wayne, N.J., is making her seventh appearance.

Ganne made her first start in the U.S. Women's Open in 2019 at the Country Club of Charleston, then later that summer advanced to the semifinals of the U.S. Women's Amateur Championship. Ganne, who has competed for the MGA in its French-American Challenge international match, earned her spot at the Spring Lake Golf Club qualifier, where professional Cheyenne Woods took medalist honors. After tying for second in the 36-hole qualifier, Ganne advanced after the second playoff hole.

Ganne, the third-youngest player in the field, is no stranger to the national spotlight, having advanced to the National Final of Drive, Chip and Putt four times and competed in the Augusta National Women's Amateur this spring. She has committed to play collegiately at Stanford and earlier this week played a practice round with with future Cardinal teammate Rose Zhang, the top-ranked amateur in the world and the reigning U.S. Women’s Amateur champion.

Following her U.S. Women's Open start as a 15-year-old, Ganne recognizes the advantage of having been there before and is looking forward to competing this week in San Francisco. "Last time I played I was a freshman, so I think more than anything, I've evolved as a person," Ganne told the media earlier this week. "I've learned so much, and I think the first experience of having the Open has made this time a lot less intimidating for me. It feels a lot different this time around, and I feel like I can just focus on my game. Last time I was just more focused on the environment and meeting all the players and everything like that, so it's a lot more relaxed this time."

Ganne tees off at 3:56 p.m. ET on Thursday, playing alongside Tiffany Chan and Matilda Castren.

This year's championship features nearly 25 hours of live coverage across NBC, Golf Channel and Peacock. View complete broadcast details through the link above.