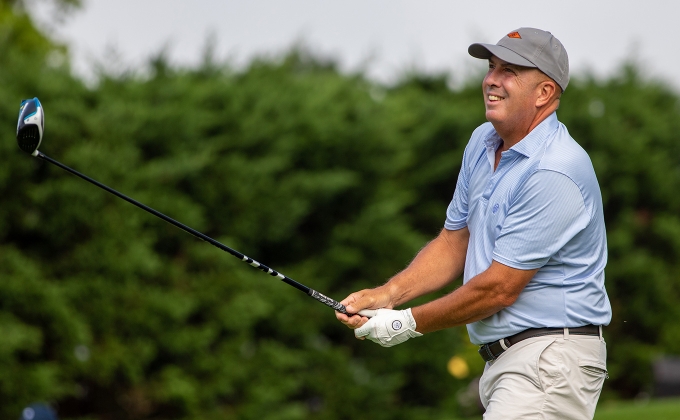 Amateur Dave Scialabba of Meadow Brook, Mike Gilmore of Winged Foot and Scott Wise of North Hills carded 4-under 68s to set the pace, leaving 21 players within three shots of the leading trio.

“The course played fantastic,” said Scialabba, the reigning LIGA Senior Player of the Year who was the first to post 68 on the day. Scialabba turned in 2-under 34 and added a birdie on the par-4 10th. While he made back-to-back bogeys on Nos. 14-15, he bounced back and then went birdie-eagle to close, holing out from the fairway on the par-4 18th.

“Those things are going to happen, you’re going to miss a green or two,” he said of the bogeys. “So, I just tried to forget [the bogeys] and I hit a good shot on 17 to make a birdie and then 18 was just kind of lucky that it went in.”

“I’m obviously a moderate underdog,” said Scialabba, who could join John Ervasti (2010) and Adam Kugler (2014) as amateur winners in the championship. “So, I feel like I don’t have much to lose and I’ll just go out and try to play a good round and hit good shots, fairways and greens.”

Gilmore is chasing a different kind of history, as the 2000 Met Open champion aims to become the eighth player to win both the Met Open and Senior Open in his career. Gilmore had a steady day, making just two bogeys to go with six birdies on his round.

“I struck it well for my approach shots and putted pretty decent,” reported Gilmore. “I’m going to do what I did today, just hit it hard off the tee and do what I do. We’ll see what happens.”

Wise, meanwhile, carded seven birdies, matching Del Ponchock of Hudson National with the most on the day. Wise, who closed in 4-under 32 coming in, credited his putting for his score, saying “I had a couple of 30-footers and I chipped in when I got in trouble on the par-5 16th.”

While Wise’s game hadn’t been in the best position entering the week, he’s now aiming to build momentum following his quality round. “Honestly, the last two weeks I’ve been a little off with the game,” said Wise. “I just wanted to get out there and hit fairways and at least get it on the green today and I felt like I did that pretty well.”

The list of chasers is long, with Mark Brown of Pine Hollow just one shot back after a 3-under 69. Brown’s case is similar to Gilmore, as the three-time Met Open champion is aiming to add the Senior Open to his resume. Brown also has history at Old Westbury, having won his 2013 Met Open title at the Club.

Twelve players fired rounds of 2-under 70, including past champions Jim McGovern of White Beeches (2016), Darrell Kestner of Deepdale (2003, 2005) and Craig Thomas of Metropolis (2013), plus first-time competitors Brian Gaffney of Essex Fells, Lou Kubisa of Knob Hill, David Schuster of Sleepy Hollow and Ponchock.

Ponchock is coming off a tie for 12th at his home club in the 106th Met Open Championship Presented by Callaway and hopes to continue momentum at Old Westbury, especially after settling in on the inward nine with a 5-under 31.

“Not knowing the golf course hurt me early, and not knowing where to hit it,” said Ponchock of 3-over start through nine. “But, I just relaxed and said you have nine holes left to play and just tried to string together some good shots. I did and the putter got hot.”

With a cut to the low 40 players and ties following the opening 18 holes, 42 players advanced to Tuesday’s final round with scores of 1-over 73 or better.

Tuesday's final round tee times begin at 8:00 a.m., with the Scialabba and Gilmore going off as the final pairing at 10:47 a.m.

While Old Westbury has three times hosted the Met Open, it’s welcoming its first-ever Lexus MGA Senior Open. Competitors are playing the Overlook and Woods nines with the $5,000 winner’s share up for grabs.