Pak Finishes as Low Am at U.S. Open

Pak Finishes as Low Am at U.S. Open 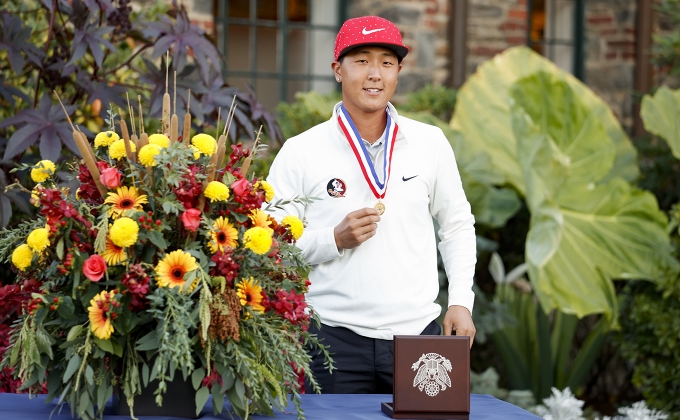 MAMARONECK, N.Y. (September 20, 2020) -- Without qualifying taking place for this year's U.S. Open Championship at Winged Foot Golf Club, an exemption called for the top seven players in the World Amateur Golf Ranking as of August 19 to gain entry. John Pak was No. 7 on that list and made the most of his opportunity, as the Scotch Plains, N.J., native earned low amateur honors.

"I've never played in anything like this, a golf course this hard, a competition this tough," said Pak, who is 21 and plays at Florida State. "It just proves that all this hard work that I've done is finally paying off, and it shows that my game is at a point where I can try and compete against the best players in the world."

Pak started strong in his major debut, shooting a 1-under 69 that included birdies on the challening 14th and 15th holes. He shot 76 in round two as the field faced more challenging hole locations and windier conditions around the famed A.W. Tillinghast layout.

His 5-over total through the first two days was two shots better than the next closest amateurs--No. 1 ranked Takumi Kanaya and Davis Thompson--and left him as the lone amateur to make the weekend.

Though Pak, who finished tied third at Winged Foot in the 2016 MGA Carter Cup, shot 79 on Saturday he rallied for the final round. Out in the day's second group, Pak shot 4-over 74 on a day where the scoring average finished at 74.9. He finished tied 51st for the championship.

Pak was honored alongside 120th U.S. Open champion Bryson DeChambeau, who applauded Pak's play on the week. Pak also made an impression on DeChambeau earlier in the week, as Pak sought advice from the now seven-time PGA TOUR winner.

Related: Pak, "In My Own Words"

Pak has had a standout career at Florida State, winning seven individual titles including the 2019 ACC Championship. As a sophomore (2018-19), Pak set the program's single-year scoring average record (69.56) and was on his way to beating that mark in 2020, averaging 69.40 before the season was halted this spring.

Sunday included a couple special surprises for Pak, including a video chat with teammates after the round and his parents being able to attend on the final day.

"I had it going pretty good there for a while, so [my parents] got to see me play some good golf at some of the toughest conditions I've ever played, so that was really special to me," said Pak, who had an eagle-two on the sixth hole on Sunday. "They've been my biggest supporters my whole life. For them to get out there and watch it, I felt that was really special."

Pak also had the highest finish of any Met Area players. Past Met Open champion and Fresh Meadow head professional Danny Balin (73-77) and Scarsdale, N.Y.'s Brandon Wu (74-76), who hit the opening tee shots Thursday on Nos. 10 and 1, respectively, both missed the cut with 10-over totals.