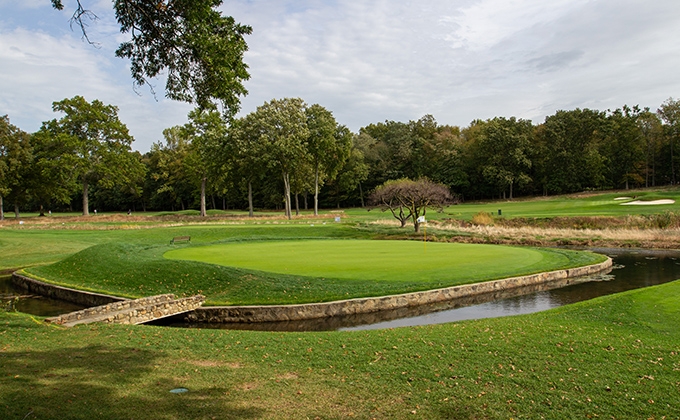 DARIEN, Conn. (October 7, 2019) -- Chester Patterson of Darlington and MGA eClub - NYC member Matthew Rendell both carded even-par 72s on Monday and sit atop the leader board at Wee Burn Country Club in the 13th MGA Mid-Amateur Championship. The duo has plenty of competitors on the chase though, as 14 total players carded 4-over 76s or better.

Patterson played well throughout, but fell victim to a lost ball on the fifth hole which led to a triple-bogey seven. A pair of bogeys followed before he made the turn, where his putter began to pick him up on the way in. "I kind of hung on and ended up making birdie on four of the first five holes on the back and played pretty solid," said Patterson, 36, who finished tied fourth last year at Maidstone. "I putted really well on the back."

Patterson felt as if his practice round at Wee Burn paid off, giving him a good game plan to take on the Devereux Emmet layout. "It was more or less what to hit off the tees and seeing kind of where you wanted to leave the ball on your second shot," Patterson said. "The greens were running pretty quick, so you wanted to make sure you're on the right side of the hole."

Rendell rolled in five birdies on the day, helping offset a trio of bogeys and a double bogey.

Brad Tilley of Sleepy Hollow continued his solid play with a 1-over 73, shooting 2-under 35 after starting on No. 10 then carding 3-over 38 on the the way in. Tilley is aiming to complete a Mid-Amateur sweep, having won both the New York State and Westchester Mid-Amateurs last week.

Wee Burn, a three-time host of the U.S. Women's Amateur, is welcoming an MGA event for the sixth time, last hosting the Senior Amateur in 2008. The club was established in 1896 in Noroton and in 1923 relocated to Darien with its course opening two years later. The course is characterized by small greens often surrounded by either mounds or dropoffs, while a pair of it's namesake "burns" or streams affect play on eight holes.