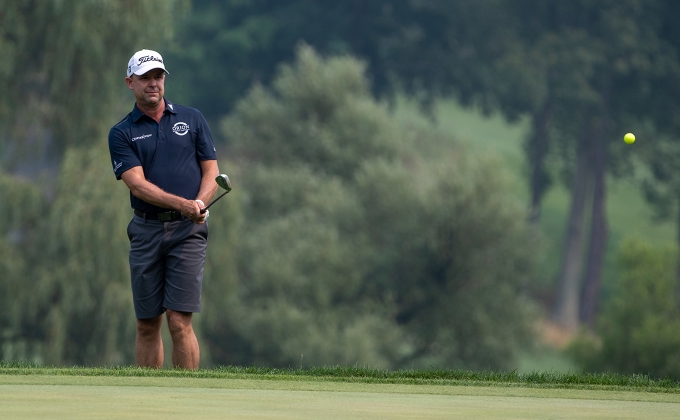 ELMSFORD, N.Y. (December 10, 2021) -- A stellar 7-under 64 in the closing round of the PGA TOUR Champions Qualifying Tournament Final Stage landed Rob Labritz of GlenArbor a three-shot victory and fully-exempt status for PGA TOUR Champions in the 2022 season. Labritz fired rounds of 65-71-67-64 en route to his impressive 17-under total.

The 50-year-old's bogey-free round placed him three shots ahead of Thongchai Jadee and David Branshaw for top honors, while Roger Roland and Tom Gillis rounded out the top-five that earned earned status for 2022. Labritz was 1-under through his opening seven holes before carding birdies on six of his next seven holes and claim the victory.

“I’ve been envisioning this happening. And it did, which is crazy,” Labritz told the TOUR after earning his longtime dream. “It shows the power of the mind. I’m beyond the moon. I’m almost speechless. I’ve been waiting for an opportunity like this, to know that my golf game held up.”

Labritz had been working toward the goal for years, even mentioning it this summer after his Westchester Open victory at his home club.

The accomplishment adds to a long list of accolades for Labritz, whohas played in eight PGA Championships. He's played in each of the last three and earned low club professional honors in both 2010 and 2019 at Bethpage Black.

ELMSFORD, N.Y. (December 9, 2021) -- Through three rounds of play in the Final Stage of the PGA TOUR Champions Qualifying Tournament, Rob Labritz of GlenArbor, Mark Mielke and Mark Brown of Pine Hollow  all sit inside the top-10 at TPC Tampa Bay in Lutz, Fla.

Labritz had a hot start on Tuesday, firing a 6-under 65 to share the opening round lead. After an even-par 71 on Wednesday, Labritz scored well again on Thursday with a 4-under 67. The two-time Westchester Open champion heads into the final round tied alongside Thongchai Jadee at 10-under and one shot off the lead held by David Branshaw.

Two-time Met Open champion Mielke has improved every day, carding rounds of 70-69-68 and will enter the final round at 7-under. He's currently in sixth place.

Brown, a three-time Met Open champion, sits one shot further back at 6-under through three rounds. Brown was under-par each of his first two days (70-67) before his even-par round on Thursday.