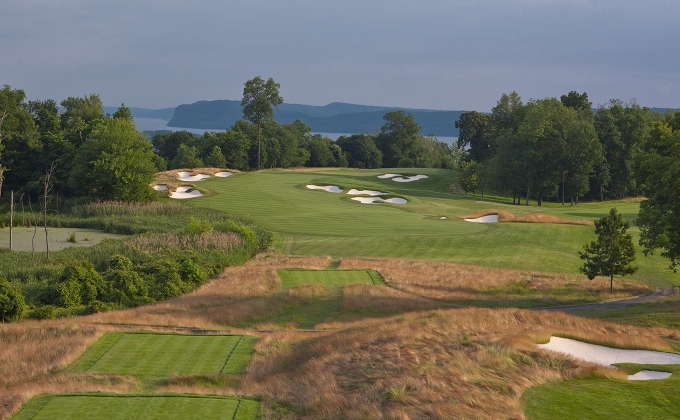 ELMSFORD, N.Y. (July 26, 2021) -- The 106th Met Open Championship Presented by Callaway returns to Hudson National Golf Club in Croton-on-Hudson, N.Y., August 24-26. The Tom Fazio design previously hosted the championship in 2004 and following continued alterations to the golf course through the years will no doubt provide a stern test for the Met Area's top competitors.

Recent playings of the championship have provided exciting storylines and moments, from Andy Svoboda completing the sweep of winning the Long Island, New York State and Met Opens in the same year in 2018 and Matt Dobyns adding the title to his incredible resume in 2019 to Luke Sample becoming the youngest-ever champion (17) and eighth amateur to win the title in 2020 at Mountain Ridge.

Professionals and amateurs alike have their eyes set on competing in the region's premier open championship, with qualifying taking place at six sites throughout the Met Area between July 26 and August 10.

July 26 - Crestmont Country Club, West Orange, N.J.
Results | Qualifying Positions: 15 & ties
Amateur Austin Devereux of Spring Lake led the group at Crestmont shooting 5-under-67. Devereux made six birdies, four of them being on his first nine. “Putting was big for me today," said Devereux. "I made a nice 40-foot putt on 17 and put myself in the right spots.” James Nicholas of Westchester posted 4-under-68, making an impressive eight birdies throughout his round. There was a three-way tie for third between amateur Dean Greyserman of Hamilton Farm, Louis Kelly of Metedeconk, and Ryan Skae of Rockland, all shooting 3-under-69. In all, 21 players shot even-par 72 or better to advance to Hudson National.

August 2 - Mount Kisco Country Club, Mt. Kisco, N.Y.
Results | Qualifying Positions: 13 & ties
Tom Lovelady of Silo Ridge carded a bogey-free 6-under 65 to lead 15 qualifiers to Hudson National. Lovelady used a trio of birdies on Nos. 7-9 to complete a 4-under 31 on his first nine before adding two more on the way in. Amateur Thomas Lee punched secured his opportunity to compete at his home club in the Met Open, shooting 3-under 68 to lead five amateurs into the field. Professionals David Pastore of Fairview, Cian Curley of Silo Ridge, Tanner Megal of Apawamis and MGA eClub Connecticut member Michael Kennedy rounded out those with sub-par scores, all posting 1-under 70s. The remaining players advanced with scores of 1-over 72 or better.

August 5 - The Seawane Club, Hewlett Harbor, N.Y.
Results | Qualifying Positions: 13 & ties
Nick Dilio of Union Vale, Tristin Goodwin of Rockaway Hunting Club and amateur Nolan Forsman of Winged Foot topped the field at Seawane with 5-under 67s. Each round had a different highlight, with Dilio carding an eagle, Goodwin recording eight birdies and Forsman registering just one bogey on the day in his steady round. In all, nine amateurs advanced including recent Met Am quarterfinalist Andre Chi of Deepdale. THe 18 players moving on to Hudson National carded 1-under 71s or better to advance.

August 9 - Fairview Country Club, Greenwich, Conn.
Results | Qualifying Positions: 13 & ties
Amateur Jackson Fretty of Greenwich posted 4-under 68 to lead the field and a total of 18 qualifiers to Hudson National. Despite opening his round with a bogey, Fretty turned it around quickly, making a trio of birdies on Nos. 4-6 and adding three more in a four-hole stretch on Nos. 10-13. One additional bogey led to his 68. Professionals Charles Meola of Saxon Woods and Fairview's own Shaun Powers, a past MGA Lexus Senior Open champion, turned in scores of 3-under 69; Meola rolling in five birdies and Powers six birdies and an eagle. Five amateurs advanced, with all those qualifying shooting scores of 1-over 73 or better.

August 9 - Panther Valley Golf & Country Club, Allamuchy, N.J.
Results | Qualifying Positions: 9 & ties
Amateurs Cody Cox of Black Oak and MGA eClub - New Jersey member Deven Ramachandran as well as professional Brent Paladino of Fiddler's Elbow all shot 3-under 68s to finish as the top qualifiers for the 106th Met Open Championship Presented by Callaway. Hamilton Farm professional Nick Bova and Andy Brock of the Golf Range at Branchburg turned in 1-under 70s. In all, 10 players advanced to Hudson National with scores of 1-over 72 or better.

August 10 - Engineers Country Club, Roslyn, N.Y.
Results | Qualifying Positions: 13 & ties
Sunny Kim of Clearview Park and Dylan Crowley of Glen Cove bested the field by three shots with rounds of 4-under 67 to earn their spots at Hudson National. Kim set a torrid pace early, going 7-under through 11 holes with a pair of eagles before making a trio of bogeys on the way in. Crowley's round was highlighted by a 5-under stretch from Nos. 6-11 in which he made eagle on the par-4 7th. In all, 16 players advanced behind scores of 1-over 72 or better.