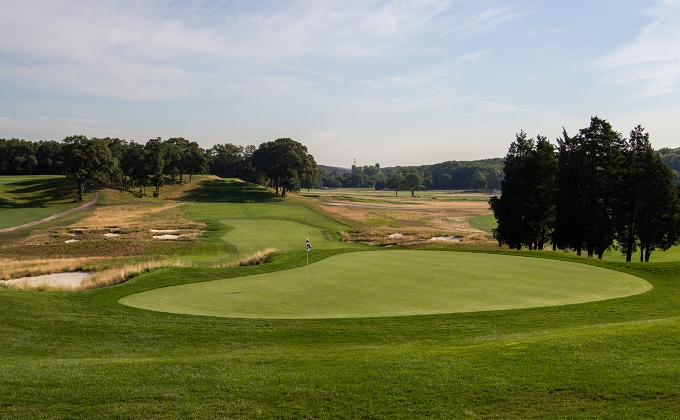 ELMSFORD, N.Y. (July 25, 2022) -- The 107th Met Open Championship Presented by Callaway makes its return to the famed Black Course at Bethpage State Park in Farmingdale, N.Y., August 23-25. This will be the Met Open's fourth trip to Bethpage's Black Course, with previous title going to an impressive list of champions: Bobby Heins (1989), Johnson Wagner (2001) and Bob Rittberger (2010).

Recent playings of the championship have provided exciting storylines and moments, from Andy Svoboda wining his third career title in 2021 at Hudson National and Luke Sample becoming the youngest-ever champion (17) and eighth amateur to win the title in 2020 at Mountain Ridge to Matt Dobyns adding the title to his outstanding resume in 2019 at Piping Rock Club.

Professionals and amateurs alike have their eyes set on competing for the Walker L. Trammell Trophy upon one of the region's most revered and challenging layouts, with qualifying taking place at six sites throughout the Met Area between July 25 and August 8.

July 25 - Hamlet Golf & Country Club, Commack, N.Y.
Eighteen players secured a spot in the Met Open following the first qualifier at Hamlet Golf & Country Club. Thomas Cooper of The Creek led the charge with an impressive seven birdies to finish 5-under. David Abolt of Meadow Brook Club and Todd Greene of Colonial Springs both held themselves to a single bogey on the day paired with five birdies to land in a tie for second with a pair of 66s. Two amateurs squeezed into qualifying positions as well, as MGA eClub - Long Island members Andre Ulvenes Klepoe and Jacob Mrva both finished tied for 13th with 1-over 71s.
Results

July 28 - Timber Point Golf Course, Great River, N.Y.
Eight players moved on to the Met Open at Bethpage Black with scores of 70 or better at Timber Point. Amateur Derek Rogers of Sands Point Golf Club led the field after carding seven birdies to shoot 5-under 67 on the day. Amateur Will Rand of East Hampton  made five birdies and Tristin Goodwin of Rockaway Hunting Club tallied two eagles to tie for second, both players carding 68s. Max Theodorakis of Ridgewood Country Club shot 3-under 69 and four players clinched the remaining qualifying spots after shooting 2-under 70s.
Results

August 1 - Aspetuck Valley Country Club, Weston, Conn.
Amateurs Jackson Roman and Adam Friedman of Sterling Farms led the way with impressive rounds of 5-under 66. Roman had a bogey-free card with matching nines of 33 for his 66, while Friedman used a hot first nine with six birdies followed by a 1-over final nine en route to his 66 and co-medalist honors. Reed Howard of Greenwich was the next best round at 2-under 69, while the final eight qualifiers carded rounds of even-par 71 and 1-under 70 to earn their spot at Bethpage Black.
Results

August 1 - Cherry Valley Country Club, Skillman, N.J.
Low scores were needed to advance from Cherry Valley, as 13 players moved on to Bethpage with scores of 4-under 68 or better. Jason Gore of Hamilton Farm led the way with a blemish-free 8-under 64 that included a 5-under 31 on the first nine. Meanwhile, Max Greyserman of Hamilton Farm and amateur Brennan Haley of Echo Lake weren't too far off the pace, both registering 6-under 66s. A trio of amateurs in MGA eClub - New Jersey member Jack Irons, Winston Blank of Baltusrol and Jack Simon of Rockaway River in addition to Knickerbocker professional Aaron Asedo all posted 5-under 67s, while six players moved on with 4-under scores.
Results

August 8 - Scarsdale Golf Club, Hartsdale, N.Y.
Tyler Jaramillo of Fenway, Anthony Casalino of Scarsdale, Chris Trout of Winged Foot and Dave Fusco of Patriot Hills all carded 1-under 69s to take top honors at Scarsdale. Fusco tallied five birdies on the day en route to his 69, while the other three co-medalists all registered four. Overall 17 players earned spots at Bethpage Black behind scores of 2-over 72 or better, including four amateurs and past Lexus MGA Senior Open champions Shaun Powers of Fairview and Craig Thomas of Metropolis.
Results

August 8 - White Beeches Golf & Country Club, Haworth, N.J.
Josh Goldenberg of Atlantic and Ray Ferrari of Echo Lake shared medalist honors with rounds of 4-under 68. An eagle-two on the 15th hole highlighted Goldenberg's round and capped off a stretch in which he played Nos. 11-15 in 5-under par. The round continues hot play for Goldenberg, who last month won the PGA TOUR Latinoamerica Dev Series Final by three shots (-21). Ferrari rolled in five birdies in his round, including three straight on Nos. 15-17. Amateur Reed Greyserman followed up a morning round at Navesink in which he qualified for match play in the NJSGA Junior Championship with a round of 3-under 69 at White Beeches, tying third alongside Brian Gaffney and Harrison Shih. Seven of the 16 players to advance were amateurs, with qualifiers shooting 1-under or better to advance.
Results