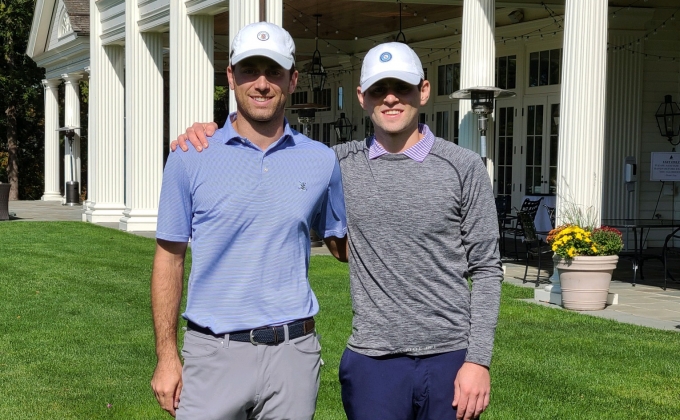 ELMSFORD, N.Y. (October 15, 2020) – The MGA this month conducted a pair of qualifying rounds for the 2021 U.S. Amateur Four-Ball Championship, sending four sides to the May 22-26 championship at Chambers Bay in University Place, Wash.

On October 8, Timothy Connors of Rye, N.Y., and Brad Tilley of Easton, Conn., carded a 4-under 66 at Westhampton Country Club to capture medalist honors. A trio of sides came in two shots back, but Chris Owen of Manhassett, N.Y., and Robert Owen of Boston, Mass., earned the ticket to Washington on the fourth playoff hole.

In the second qualifier on October 15, brothers Will and Sam Bernstein shot 6-under 65 to capture medalist honors at GlenArbor. Three teams came in just one shot back, but Brad Jordan of Norwalk, Conn., and John Lamendola of Greenwich, Conn., emerged from the playoff to grab the final qualifying position.

Meanwhile, a number of Met Area players also earned their way to the championship through additional qualifiers.

Former Penn State teammates Tommy McDonagh of New York, N.Y., and Brendan Borst of Bryn Mawr, Pa., fired a sizzling 8-under 64 at Hackensack Golf Club. The duo made a run to the Round of 16 in 2018 at Pinehurst and had also qualified for the 2020 championship, which was cancelled.

Past MGA Mid-Amateur champions Darin Goldstein of New York, N.Y., and Trevor Randolph of Franklin Lakes, N.J., also qualified from Hackesack, teaming up to shoot 6-under 66. The duo knows one another’s games well having competed and played together in MGA International Matches.

Brent Ito of Ardsley, N.Y., a past MGA Boys champion, paired with Michigan teammate Patrick Sullivan of Grosse Point, Mich., to advance. The two carded an 11-under 61 at Battle Creek Country Club in Battle Creek, Mich., securing the qualifier’s only advancing position by one shot.

Sam Goldenring of Florham Park, N.J., also qualified alongside one of his college teammates, pairing with his fellow Williams player Will Kannegieser of Minot, Maine. The pair were one of three teams to card 6-under 66 at Berkshire Hills Country Club in Pittsfield, Mass., and advanced out of the playoff as only two qualifying positions were available.

Raymond Gresalfi of Great Neck, N.Y., paired with Ford Bennett of Owings Mills, Md., at Timberlin Golf Club in Berlin, Conn., to shoot 8-under 64. The duo were one of four teams to fire the low number of the day, but a birdie on the second playoff hole secured their spot at Chambers Bay.