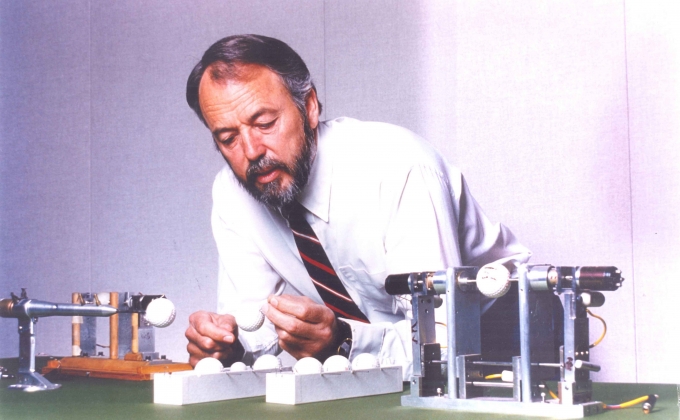 Frank Thomas’s time with the USGA coincided with an explosion of new technologies fueled by the use of computers to examine aspects of everyday life.  Sophisticated materials, techniques, and designs all advanced rapidly through golf thanks to the expansion of computing power.

Why golf in particular?  The answer lies in the game’s demographics – and even Frank’s work on the graphite shaft reflects this aspect of golf in America.  Union Carbide approached Shakespeare Sporting Goods to develop sports applications for graphite – lighter than steel and stronger – not merely to sell fishing rods and then golf clubs.  The company knew that top-level corporate executives love to go fishing and to play golf; by literally putting graphite in the CEO’s hands, UC was showcasing the material’s properties to the perfect audience.  Surely once those men recognized that this material truly performed as the company said it did, they would look at its potential applications for aerospace, automotive engineering, defense production, and any number of other industries.  It was genius marketing, in which the CEO is being led to a conclusion he thinks is his own.

At the USGA, Frank was involved in a broad array of initiatives that touched many parts of the game.  He worked with Dean Knuth on development of the SLOPE System that improved the accuracy of handicaps achieved on different courses.  He adapted a device created by Edward Stimpson, Jr., in 1935 for measuring green speeds, standardized its performance, and named it for its original proponent; the Stimpmeter is now ubiquitous in championships and at clubs.  He provided a thoughtful engineer’s perspective on any number of topics for the USGA, and gave roughly a thousand or so rulings each year on proposed new products or alterations to existing ones.  (Roughly 75% of those rulings involved putter designs, which makes it both understandable and ironic that in his post-USGA career he concentrated on putting and putters, designing the Frankly Frog and establishing an evidence-based putting curriculum that is taught by pros around the world.)

The PING dispute over the company’s U-shaped grooves was an exceedingly technical disagreement over a very small thing.  The greater volume of the U-shaped groove (compared with a V-shaped one) meant that more grass would be channeled away from the collision of clubface and golf ball, resulting in more spin from juicy lies.  That wasn’t where the violation lay: The problem was that, first, the sharp edge at the top of the U was shearing threads off the softer covers of the balls preferred by pros; and second, when the manufacturing process was altered to round off those sharp edges, the flat space between grooves was too small, both on its own and as a percentage of the club’s face. This violated a specification in the Rules.  Informed of this, PING sued, and after a few contentious years the suit was settled.  The performance effect was minor, but the principle was not.

The other development that for better or worse defines Frank’s reign as technical director was the “springlike effect” created by ultrathin-faced titanium drivers at impact.  The phrase “springlike effect” is Frank’s, and how it came to be – and to be accepted – is quite a story.

In 1908, the first regulation on “Form and Make of Golf Clubs” was appended to the Rules by the R&A, adopted by the USGA a year later.  It included wording that a club must consist of “a plain shaft and a head which does not contain any mechanical contrivances, such as springs.” This was a literal concern: that some enterprising manufacturer would find a way to spring-load a club head so the face would go spronggggg at impact and propel the ball far down the fairway.

In 1983, during a modification of the Rules, Frank changed this wording slightly to prohibit the clubhead having “the effect at impact of a spring.”  Wherever possible he believed that a rule should address the ends – the purpose of a restriction – rather than just the means; he didn’t know of any materials that could behave like a spring at impact (a steel face thin enough to “give” and reform that quickly would collapse under the stresses) but he wrote the rule to prohibit the effect rather than define the cause.

In 1997, he got a call from the R&D department of TaylorMade about some anomalous test results they were finding with some drivers.  The ball was leaving the club face at speeds that couldn’t be explained by the force of impact.  By this time titanium had entered the picture; the 1995 Big Bertha was the first club with a titanium face to hit the market.  The goal for club designers once metal drivers became standard was to move as much weight as possible away from the center of gravity to improve results – a bigger sweet spot and less twisting on off-center hits.  (He delighted in demonstrating this effect of concentrating or spreading the weight by spinning in an office chair, holding his arms tight to his body to spin faster, then throwing them out wide to slow himself down.)  This wasn’t possible with wooden clubs, or forged metal ones, but it was relatively simple with investment-cast metal drivers.  Titanium was vastly stronger and lighter than steel; manufacturers had taken weight dispersal as far to the perimeter as they could, so lighter and thinner points of impact were the only way to further increase resistance to twisting.

On close examination it was determined that the driver faces were so thin that they were deforming and then reforming during the time of impact – a duration of .00045 seconds, a period so short there is time for roughly 220 impacts in the blink of an eye.  The face was acting like a trampoline, imparting an extra oomph to the ball.  For the first time in golf history, the equipment itself was adding energy to the equation of impact, rather than transmitting the energy generated by the golfer’s swing.  It was having, in other words, the effect of a spring.

Frank brought his findings to the USGA’s Executive Committee, with his recommendation that all such clubs be declared nonconforming.  (The USGA doesn’t determine whether something is “legal” or “illegal,” merely whether it conforms to the Rules of Golf or not.  Adherence to the Rules of Golf is strictly voluntary on the part of individuals and groups of golfers; nonconforming clubs and balls can be sold and used, just not in competitions governed by the generally agreed-upon Rules.)  The manufacturers insisted they could not expect to be held to a standard without an explicit statement of test specifications.  Frank argued that there was an explicit statement already in the Rules: No spring-like effect.  Zero.  End of story.

The Committee, having only recently been under the threat of a $300 million judgment in the PING lawsuit ($100 million damages, to be tripled since the suit was an antitrust case), did not want another long legal fight.  The USGA in 1998 chose to set an equipment standard for springlike effect that allowed all existing clubs to remain on the conforming list. It was an expeditious solution, and one the game has lived with (if not always easily) for the last two decades.