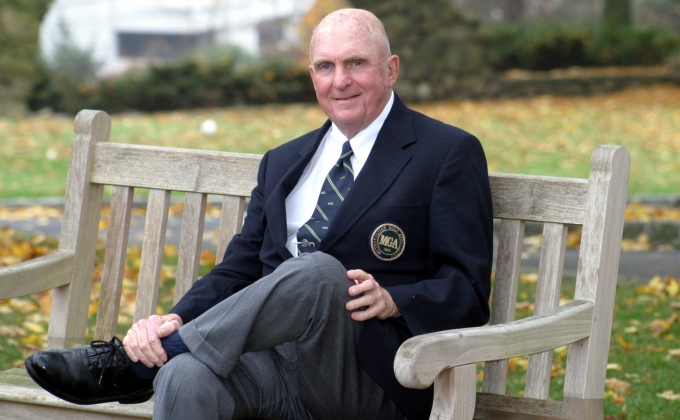 ELMSFORD, N.Y. (July 21, 2021) – The MGA and MGA Foundation are very sad to share the passing of Mr. Paul R. Dillon on July 20 at age 85. Dillon, a past MGA President and recipient of the MGA’s Distinguished Service Award, had been a longtime advocate of the game as a leader, coach, and artist, and was one of the most recognizable figures in Met Area golf.

Dillon grew up in New Rochelle, N.Y., and like many golfers, his first exposure to the game was as a caddie. In spite of this, and a lifelong love of all sports, he did not play his first round of golf until the age of 23. After attending Iona College, Dillon began a 30-year career with the Union Camp Corporation, a company that is now part of International Paper, and put golf on hold while he and his wife of nearly 60 years, Mary Ellen, could raise their six children in Mamaroneck, N.Y. At age 45, he rediscovered the game and joined Wykagyl Country Club and then, in 1987, joined Winged Foot Golf Club where he was an active member.

Dillon first began volunteering with the MGA and the Westchester Golf Association in the early 1990s. He quickly began to take on leadership positions and served as President of the WGA from 1994-1995. He was President of the Westchester Golf Association Caddie Scholarship Fund from 1997-2001, helping to provide pathways for caddies and those in service to golf. Following his presidency, Dillon remained an active Director on the WGACSF Board. 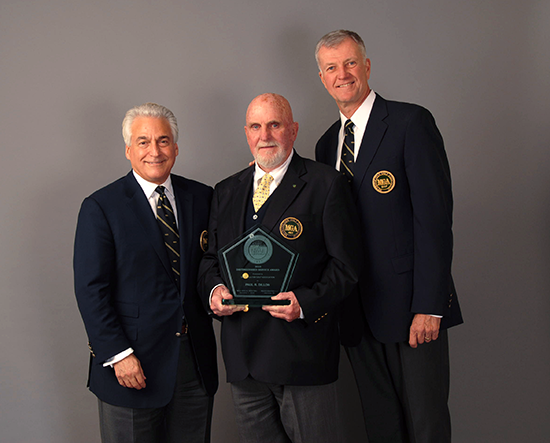 Dillon also rose through the ranks of volunteer leadership at the MGA, starting as chairman of the Public Links Committee. He was later elected to two terms as President of the MGA and Chair of the MGA Foundation from 2003-2004. Dillon was instrumental in launching the MGA’s Capital Campaign, on which he served as co-chairman with Lowell Schulman, and his efforts played a large part in expanding the MGA Foundation’s GOLFWORKS program and introducing future generations to the game. He was awarded the MGA’s highest honor, the Distinguished Service Award, in 2010.

In addition to leadership roles with the MGA, WGA, and WGACSF, Dillon was the head coach of the Fordham University Men’s Golf Team for 22 years. He started coaching the Rams in 1995 and turned the Rams program into an Atlantic 10 Conference contender. He was voted the conference’s Coach of the Year in 2004 and took great pride in working and traveling with the team, even later in life.

Already known for his dedication to service and giving back to the game, Dillon had another talent that the Met Area golf community was lucky to have benefited. Dillon was a celebrated golf artist known for his portraits. He painted and donated hundreds of portraits of the game’s great players, many of which hang prominently in golf clubhouses. Each year, Paul gifted portraits of the MGA and Metropolitan Golf Writers Association award recipients. A large selection of his portraits are proudly displayed in the “Dillon Gallery” at the MGA’s Golf Central headquarters. 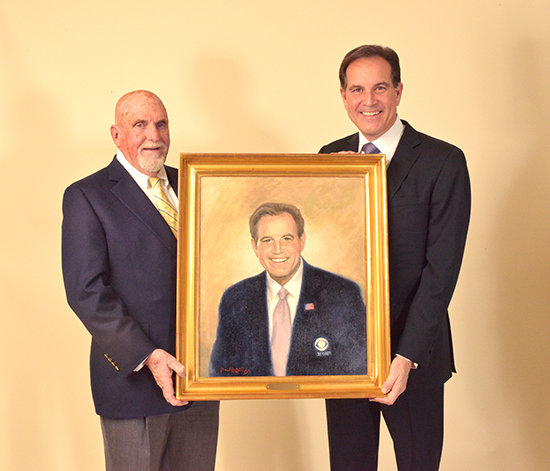 Dillon presenting Jim Nantz with a portrait at the 2013 MGA Annual Meeting and Dinner.

Dillon was recognized by many local groups and Associations for his contributions to all areas of golf. In 2003 he was honored with the Metropolitan Golf Writers Association’s Distinguished Service Award. He was presented with the Metropolitan Golf Course Superintendents Association’s prestigious John Reid Lifetime Achievement Award, honoring “an individual who, through a continuing lifetime commitment, promotes the science and art of golf course management and the professional image of the golf course superintendent.” In October of 2018, Dillon was inducted into the Westchester Sports Hall of Fame and in 2019 the Fordham Athletic Hall of Fame. He was one of three subjects in a 2019 documentary, “Light Years,” which followed Dillon and others in their “second act lives.”

Sentiments summarized in the announcement of Dillon’s Distinguished Service Award remained true until his passing: He has been the consummate ambassador of golf. Paul’s dedication to spreading the game’s values and traditions along with his relentless service to the MGA and WGA have made him one of the most beloved members of our golf community.

In lieu of flowers, contributions in Paul’s memory can be sent to The Westchester Golf Association Caddie Scholarship Fund.

Services are as follows: