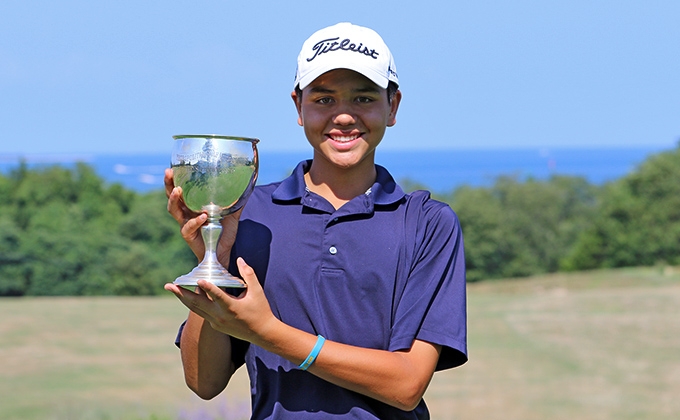 SHELTER ISLAND, N.Y. (August 10, 2018) – Consistent play from Luke Sample of New York, N.Y., led the 15-year old to the title, Friday, in the 50th MGA/MetLife Boys Championship at Gardiner’s Bay Country Club. Sample picked up a 4-and-2 win in the morning over Charlie Cummings of Wyckoff, N.J., before defeating Garrett Kessler of North Caldwell, N.J., in the afternoon, 3-and-2, to hoist the trophy.

While birdie putts weren’t dropping in his morning match, Sample rode his solid ball striking to the victory. He then used birdies on the par-5 2nd and par-3 4th to grab an early 2-up lead in the final against Kessler—who defeated James Alden of East Northport, N.Y., in his morning semifinal.

“My ball striking held up pretty well,” said Sample, who recently won the New York State Junior Championship. “With putting, I got a couple later in the day, but especially in the morning I tried to keep the ball in front of me as much as possible and set myself up for easy pars.”

Sample extended his lead to 3-up with a par-4 on the 5th, but Kessler responded with birdies on Nos. 6 and 8 to trim the lead back to one. After a pair of halves, Sample won the 11th with a par-3, then made an unexpected birdie on the par-4 13th to push his lead back to three. His drive on the hole found the left fescue, but a well-struck recovery shot finished eight feet from the hole and he converted the putt.

“That shot was big for me and I think that really propelled me through the rest of the round,” said Sample.

Sample and Kessler halved the next three holes, leading to the 3-and-2 final and earning Sample his highly sought after title.

“I said earlier in the year when we were building the schedule, that this is one event that I really wanted to play and win after what had happened last year,” he said, referring to a close loss in the semifinals last season. “I thought I was close and this is the last time I can play it. It means a lot—there’s a lot of history and it’s the 50th playing. I’m just really happy to be in this position.”

With their appearances in the finals, both Sample and Kessler earn an exemption to next year’s Met Junior and Carter Cup, two of the region’s most competitive junior championships.

The MGA/MetLife Boys Championship was first played in 1969 at Westchester Country Club. Since 1987, the event has rotated between Gardiner’s Bay, Rumson in New Jersey and Bedford Golf & Tennis in Westchester County. While Gardiner’s Bay’s original architect is unknown, the layout—which was founded in 1896—was redesigned by Seth Raynor. The layout winds its way over rolling topography on Shelter Island, and includes multiple water views.