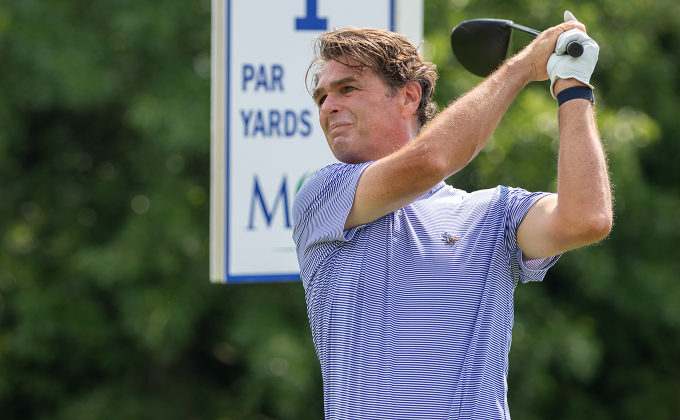 FAIRFIELD, Conn. (August 29, 2022) – Reigning champion David Schuster of Sleepy Hollow and 2022 U.S. Senior Open competitor Bill Van Orman of Meadow Brook registered the low score in Monday’s opening round of the 26th Lexus MGA Senior Open Championship at The Patterson Club. The duo carded 2-under 69s to share the overnight lead, but with the cut falling at 4-over 75, all those teeing it up on Tuesday still sit well within striking distance entering the final round.

Seven players enter Tuesday just one shot back of Schuster and Van Orman, including past champions Jim McGovern of White Beeches (2016) and Frank Esposito of Mountain Ridge (2020).

“I just kept it in play,” said Schuster, who won the championship in his first year of eligibility in 2021. “I made a couple of nice birdie putts on the front nine, then held my own on the back and made a bunch of pars.” Schuster made four birdies to two bogeys on the first nine before adding a bogey and birdie apiece coming in.

Schuster, one of 14 players making this start this week after competing in the Met Open last week at Bethpage Black, has been pleased with his game as of late.

Schuster is aiming to become the third player in the championship’s history to win in back-to-back years, with Bobby Heins of Old Oaks last accomplishing the feat in 2008-2009. He’s not getting tied up in the feat though, saying he’s just thinking of it as another tournament.

Van Orman matched Schuster with five birdies on the day despite admittedly not hitting it very well entering the championship. However, Van Orman just played his own game and kept it steady throughout the round.

“I just played my big slice out there all day,” said Van Orman, who was runner-up to McGovern following a playoff in the 2016 MGA Senior Open at Brooklawn. “I didn’t do anything great, but I didn’t do anything really bad. I kept it in play and made a couple of putts when I needed to, so it was pretty stress free, actually.”

Van Orman played at The Patterson Club back in high school, enjoyed getting reacquainted with the layout and looks forward to Tuesday’s final round.

The story was much of the same for the majority of the field—either playing the course for the first time in years or getting their first look on Monday.

Jim Farrell of Hamlet and Scott Paris of Plainfield—who carded morning 1-under 70s—played conservatively and look forward to knowing where they can be more aggressive during the final round.

“I’ll be freed up a little,” said Farrell, who made birdies on Nos. 9-11 en route to his 70 and recalled playing the course approximately 10 years ago. “They’ve taken out a lot trees. I was a little bit tentative, that’s probably why I made bogey on one, but it’s great. This place is awesome.”

“I kind of played conservative and a couple of my iron shots kind of fed off some slopes and I got some decent looks,” said Paris. “I know where to miss it a little better than I did today, and I think that should lead to hopefully some good decisions tomorrow.

Current low amateur Ed Gibstein of Glen Head, Del Ponchock of Hudson National and Greg Baker of Rockaway River are also part of the group just one shot back. Gibstein also had five birdies on the day.

Two-time past champion Darrell Kestner of Deepdale (2003, 2005) and Philip Cardwell of Rockville Links turned in rounds of even-par 71, while two more past champions Ed Whitman of Knickerbocker (2004) and Shaun Powers of Fairview (2019) and 20-time MGA champion George Zahringer of Deepdale are a formidable trio starting Tuesday’s final round at 1-over.

Amateur Adam Kugler of Alpine (2-over) and Craig Thomas of Metropolis (4-over) round out the past champions making the cut.

The Patterson Club is welcoming its third MGA championship, last hosting the Met Junior in 2016. Players making their first visit to the club were impressed with all aspects of the property and enjoyed the challenges of the course.