A Second For Sample

A Second For Sample 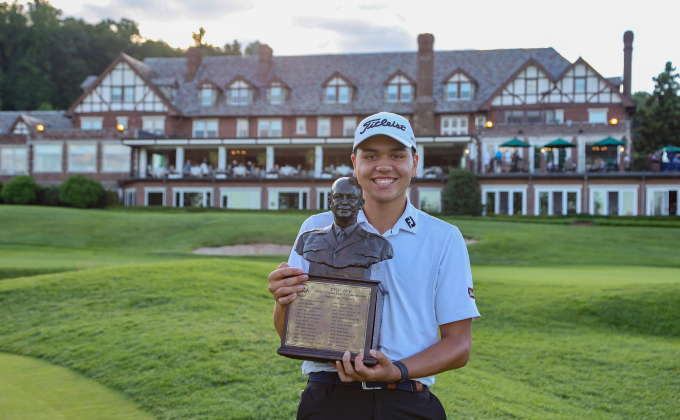 “It feels incredible,” said the 19-year-old Sample. “To be honest it feels like a long time since I’ve walked down 18 or stood on 18 with a shot that really felt like it meant something. To be able to perform under pressure and get the job done down the stretch really meant a lot.”

Sample, the 2020 Met Open champion, was tied with McCarthy going into the 17th hole, but made par to McCarthy’s bogey to take a lead he would only build on on the 18th.

“This feels very rewarding,” said Sample, a rising sophomore at Duke University. “I didn’t have the same game I had at Mountain Ridge in the Met Open a couple years ago. This week, to be able to get it done when I felt like I didn’t have my best ball striking felt different, but just as rewarding.”

Though Ike was decided over the last few holes, Sample said the moment that kick-started his final round came on the second hole.

“I made a mess of that hole,” said Sample. “I really tried to stick with it and I stood over that [bogey] putt knowing what it meant and knowing there were 16 holes to play after that. I think [when I made it] that was the most animated I was all day. It was one of those putts when I saw it, I felt like it had a really good chance to go in.”

After that hole, Sample made par on three straight before heading to the 450-yard par-four sixth. After a solid approach to about 15-feet, Sample rolled in his first birdie of the round. He didn’t wait long for his second. He was just over the green on the par-five seventh in two and was able to get up and down for another birdie.

“Six was really important, I had just come off a pretty sizeable par-save on the fifth,” said Sample. “On that hole I told my caddie, ‘I think we’re really going to lock in now’. Converting after a great approach was big and then making birdie on seven without my best stuff was important as well.”

Sample played nine holes in the morning with his brother Andrew on the bag and in the afternoon a would-be spectator turned into his caddie for the victory.

“I got a nice surprise with Harold Chang showing up,” said Sample. “He’s been a mentor to me in so many ways and I asked him if he wanted to hop on the bag. It was great to have him out there and we had a lot of fun.”

Chang, Sample’s high school coach and math teacher, also caddied for him during the 2019 Met Amateur at Hudson National.

Meanwhile, McCarthy would not go quietly. The Yale graduate fired a tournament-low, 4-under 67 during the second round and led by three shots going into the final 18. After relinquishing the lead on the seventh hole, McCarthy fought right back with a birdie on the eighth to regain the lead. He routinely rolled in testers for par on the back nine, before finally dropping a shot on the 17th.

“The two of us played some really solid golf on the back nine,” said Sample. “He really made me earn it. It was cool and I was cheering for him to make his putts. I’m glad that I could pull it out and win the tournament instead of one of us losing it.”

McCarthy was the only other player in the field to finish at under par. Charlie Berridge of Wykagyl battled his way back to finish third after a final round 71. Berridge, at 2-over, finished one stroke ahead of reigning two-time MGA Player of the Year Mark Costanza of Hamilton Farm. Also finishing in the top-25 from Hamilton Farm was Pat Wilson, at 12-over. Wilson and Costanza were awarded the Ike Team Championship trophy for Hamilton Farm Golf Club, a tradition since the inception of the Ike back in 1953.

Peicheng Chen of Rock Hill and Tyler Gerbavsits of Huntington Crescent rounded out the top five at Baltusrol, both posting three-round totals of 4-over. Chen was coming off wins in back-to-back weeks at the MGA Public Links Championship and the Long Island Amateur.

With the win in the 67th Ike, Sample is now a four-time MGA winner and two-time major champion. The only major not in his collection is the Met Amateur, which will be contested from August 4-7 at Fenway Golf Club. Sample’s best finish in the event was in 2020 when he finished runner-up to Jack Wall at Bethpage.

“I want it really badly,” said Sample, who is a past champion of Fenway’s Mittelmark Invitational. “It’s a long week and I think with college golf I feel very prepared for a long week. I have to go into the stroke play ready to make something happen and then we’ll see what happens in match play.”

Sample becomes the fifth golfer in MGA history to win both the Met Open and Ike joining Jerry Courville Sr., George Zahringer, Johnson Wagner and Andrew Giuliani. Of the group, only Giuliani won the Met Open as a professional.

Baltusrol was a true test of golf for the field hosting the first multi-round championship on the Lower Course since it's 18-month restoration overseen by Gil Hanse that was completed in spring of 2021. Baltusrol becomes the 19th venue to host each MGA Major Championship.