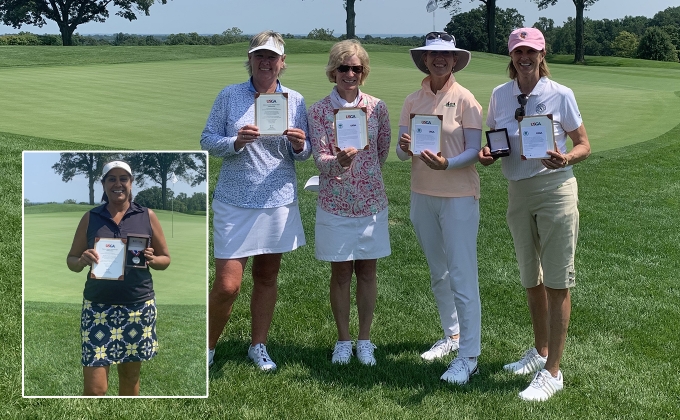 Six players, including medalist (far right) Missie Berteotti and amateur Leela Narang-Benaderet (inset) of Westport will tee it up at Brooklawn Country Club.

Missie Berteotti of Pittsburgh led the field with an even-par 72. Berteotti, who won on the LPGA Tour in 1993, will be making her second appearance in the championship, having finished 36th in the inaugural event in 2018 at Chicago Golf Club. Berteotti's four birdies on the day helped offset a quartet of squares on the scorecard and allowed her to best the field by four shots.

Westport, Conn., amateur Leela Narang-Benaderet, who plays out of Shorehaven, won't have far to go to compete in her first U.S. Senior Women's Open, after her 4-over 76 left her tied for second alongside Michelle Dobek of Chicopee, Mass., another first-time competitor.

Meanwhile, Kelley Brooke--the owner and director of instruction of the Golf Channel Academy with Kelley Brooke at Bethpage State Park--will be making her second consecutive appearance in the championship, as she, past LPGA Teacher of the Year Cheryl Anderson of Heathrowe, Fla., and Canada's Julie Piers all posted 5-over 77s to step in as the final qualifiers. Piers, who won on the LPGA Tour in 1995 also qualified in 2019, earning medalist honors in the MGA's Green Brook qualifier.

The competitors will face a challenging field in the U.S. Senior Women's Open, as 11 former U.S. Women's Open champions are in the field, including first-time participant Annika Sorenstam. Brooklawn is ready for its return to the spotlight as a national championship host, as it welcomes its fifth USGA championship.

For more on the event, view the MGA's preview video as part of its Road to the Majors, in Partnership with Rolex, a multi-year video series focused on the biggest championships in golf taking place in the Met Area.