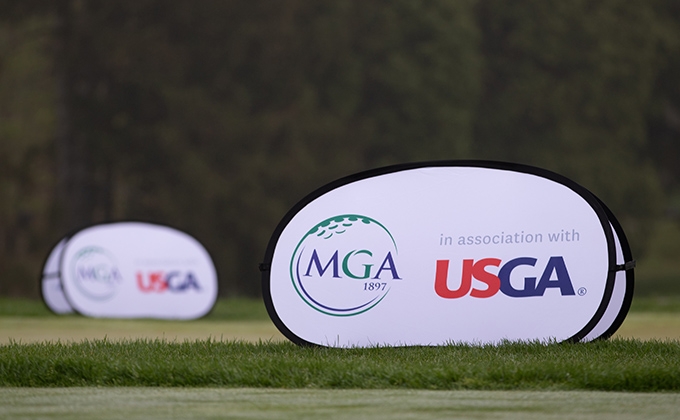 Yoona Kim of Fairlawn, N.J., registered a 1-under 71 to earn medalist honors. Kim carded five birdies along with four bogeys in the wet conditions over two days to advance to SentryWorld. All players had completed nine holes on Tuesday before play was suspended due to heavy rains. Play then resumed Wednesday morning.

Megha Ganne of Holmdel, N.J., advanced to her second USGA championship of the season after competing in the U.S. Women's Open Championship, after posting even-par 72. Valentina Rossi of Argentina and Caroline Hodge of Larchmont, N.Y., both carded 75s to punch their tickets as well. The first alternate spot went to Caroline Curtis of Richmond, Va., who carded a 4-over 76. The second alternate position was claimed by Sydney Yermish of Wynnewood, Pa., with a 6-over 78.

The U.S. Junior Amateur Championship sectional qualifying round, originally scheduled for Tuesday afternoon, was postponed to Wednesday as well, with Caleb Manuel of Topsham, Maine walking away with medalist honors behind a 5-under 67.

Manuel carded an eagle and four birdies while carding just one bogey to advance to Inverness in Toledo, Ohio for the July 15-20 championship. "I stayed patient," said Manuel. "I started on one with an eagle, so I knew I could coast my way in from there. Putts were able to fall on the back nine and, overall, I played smart."

Two-time MGA/MetLife Boys champion Nathan Han of Somers, N.Y., grabbed the final qualifying spot in a playoff after he and Matthew Minerva of Elmsford, N.Y., both carded 3-under 69s.

For complete coverage of both the U.S. Girls' Junior and the U.S. Junior Amateur, please visit usga.org.